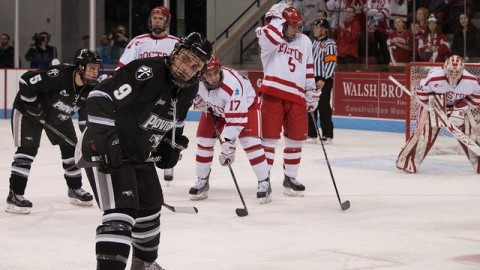 In the Friendship Four Championship in Belfast, Ireland, UMass Lowell walked away as champions after defeating Brown in a shootout following a 5-5 tie at the end of regulation play. Junior defenseman Dylan Zink scored the lone goal of the shootout to deliver the River Hawks the inaugural Belpot Trophy.

Brown (2-3-4, 2-3-2 ECAC) was chasing UMass Lowell all night, including facing two-goal deficits twice in the game. But the Bears eventually rallied, and a goal by junior Zack Pryzbek at four minutes, five seconds of the third period gave Brown their only lead of the night, a 5-4 advantage. Brown would hold that lead until River Hawks sophomore forward C.J. Smith scored the game-tying goal as an extra attacker with only 39 seconds to keep No. 4 Lowell in the game.

Smith, who led the charge offensively for the River Hawks (10-1-4, 6-1-3 Hockey East), scored two goals to go along with one assist on the night, while also registering a game-high eight shots on net. He was named “Man of the Match” for his performance in the championship.

Following a 5-0 rout of Colgate University to reach the title game, Brown was unable to continue its success against a stout UMass Lowell side. The River Hawks advanced to the championship following their 3-2 victory over Northeastern.

UMass Lowell had a convincing advantage in shots, 40-24, while outshooting the Bears 15-3 in the pivotal third period.  River Hawks junior goaltender Kevin Boyle stopped 19 shots, including all 3 in the shootout, while Bears goaltender Tim Ernst finished with 35 saves.

Brown is off until its home game with Princeton University on Dec. 4 at 7:00 p.m.

The River Hawks return to action with a trip to the XL Center and a matchup with Hockey East rival UConn on Dec. 5.

Providence continued its impressive unbeaten streak, defeating Yale 4-3 on Saturday to move to 16 straight games without a loss dating back to last season.

The defending NCAA champion Friars improved to 9-0-3 to begin the year, while the Bulldogs fell to 5-2-2.

No.1 Providence took a 2-0 first period lead, but Yale stormed back with three unanswered goals to take a 3-2 advantage into the third period.

Friars forward Brandon Tanev was ejected for an illegal hit midway through the second period, which set up a five minute double major in which the Bulldogs were able to tie the game at 2-2 and take the lead just 19 seconds later.

But Josh Monk’s first career goal and Jake Walman’s 10th of the season put the Friars back on top in an exciting third period, and Providence would hold on for the 4-3 victory.

Friars junior goaltender Nick Ellis registered his eighth win of the season, making 25 saves on 28 shots, while Yale goaltender Alex Lyon made 27 saves in the loss.

The Friars will look to continue their historic unbeaten streak in an away game at Merrimack on Dec. 4, while Yale will also be in action on the same date when it takes on in-state rival Quinnipiac at home.

Matthew Williams can be reached at [email protected]