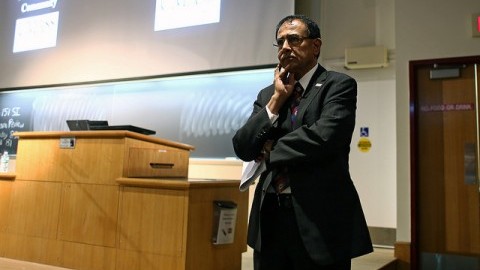 University of Massachusetts resident assistants and peer mentors are set to march to Chancellor Kumble Subbaswamy’s office Tuesday to demand labor contracts that require the University to show just cause in disciplinary action situations for all Residential Life employees.

Participants in the “Rally and March for Just Cause,” which is scheduled for 1 to 2 p.m., will meet in front of the Student Union before heading to Whitmore Administration Building to deliver their demands to the Chancellor. An online “No Just Cause, No Peace” petition started by the United Auto Workers Union Local 2322 has collected more than 530 signatures. RAs and PMs are unionized members of UAW Local 2322.

“We feel like the Chancellor needs to know that they’re not listening to the workers and that UMass should be ashamed of itself,” said Court Cline, the UAW Local 2322 representative for Residential Life workers.

“We’re not saying that they can’t discipline people, we’re saying they have to follow the same kind of proof that every other worker on campus is entitled to in terms of discipline,” he said.

RAs and PMs are currently the only unionized employees on campus that do not have just cause included in their contract, according to Cline. He said that Residential Life employees started bargaining for revised contracts in April and that their current agreements expired in July. UAW Local 2322 identified just cause as the most significant contract issue that needs to be addressed.

Just cause, in this case, means that student Residential Life workers could not be suspended or terminated by the University without being able to appeal decisions they find unfair to a neutral arbitrator.

Cline said the burden of proof falls on the University.

“Without just cause, everyone becomes an employee at will, so people are disciplined or terminated without due process,” he said.

Cline said this “big flaw” in the RA contract is critical to Residential Life employees because when they are fired from a position, they also lose their on-campus housing and are forced to move out within seven days.

University spokesman Ed Blaguszewski addressed RA and PM requests for just cause in a statement to the Daily Collegian in October.

He said that though the University agrees due process is an important element in a work contract, there is already an appeals process in place that allows individuals to “contest or correct sanctions they believe were unfairly imposed on them,” and that adding another layer of appeals to this process is “not necessary.”

“Contracts between the University and resident assistants, beginning in 2003, have never included a just cause article for this reason,” he said.

Blaguszewski also said that most terminations in the RA and PM bargaining unit are for violations of the Code of Student Conduct or for workers not meeting minimum grade point average requirements, and that both situations that can be appealed through existing University appeal processes. Workers are normally put on paid administrative leave while they appeal, he says.

The University concluded its statement by saying that it will continue to work with the union to see if the two parties can agree on a system that “provides an opportunity to guarantee a chance to have a fair hearing but does not include the time consuming and costly process of labor arbitration.”

Sïonan Barrett, a resident assistant in John Quincy Adams Tower and president of the Student Government Association, said she will be marching on Tuesday and that the plea for just cause is an issue that is personally important to her.

She said that she went through the conduct system as an RA during her sophomore year, and if the verdict determined in her situation had been decided differently, she would have been out of a job without any proof she violated the Code of Student Conduct.

Though she would not specify what her disciplinary situation was, Barrett said one of the five RAs involved in the situation was terminated – Barrett herself was not.

“I wish there was a little bit more proof and also more negotiating before they let go of RAs because I think a lot of the times the department thinks we’re dispensable,” she said. “The RA union has been organizing around just cause for a couple contracts and this is a time that we’re actually going to prioritize it and I hope that the University takes it seriously.”

Ian Roche, a senior and second year PM, said in a UAW press release, “We want the Chancellor to understand that there will be no labor peace until this issue is resolved. Knowing the overwhelming support we have from students, UMass faculty and staff unions, community leaders and political officials, we are ready to fight as long as it takes.”

Cline said he anticipates the Chancellor will not come out and speak to the rally, which is why a delegation will be sent into his office to present the UAW petition.

He said that the union is taking the issue to the Chancellor because the University bargaining team has acted as his representative in the past, and that he “needs to know that they’re not listening to the workers.”