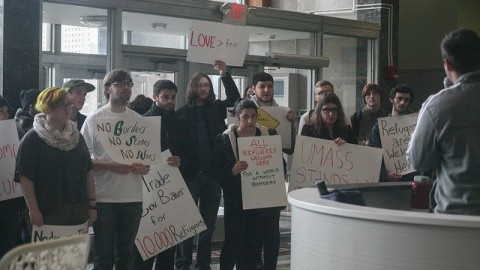 While the Senate voted against passing a similar motion on Nov. 23 due to concerns over language in a letter written on behalf of the UMass student body to Baker, which was considered by undergraduate senators to be overly dramatic and confrontational, the more mild language in this incarnation of the motion was not seen as an issue by senators.

“We’ve sat down with the committee that originally wrote this letter, and we’re supporting this version,” said Tristan LaLiberte, the governor of the Orchard Hill Residential Area. LaLiberte had urged the SGA senate not to support the motion on Nov. 23, but said he was comfortable and supportive of the new version.

The only major source of disagreement regarding the motion was over an amendment to the letter that would have added U.S. Reps. Stephen Lynch and Bill Keating as recipients of the letter. Lynch and Keating, both Democrats, voted in favor of the American Security Against Foreign Enemies Act of 2015, which requires the secretary of Homeland Security, the director of the FBI, and the director of national intelligence to sign off on every refugee from Iraq and Syria to confirm they are not a security threat.

The American SAFE Act of 2015, which was primarily supported by Republicans, passed in the House of Representatives 289-137 on Nov. 18.

The SGA’s Secretary of Finance, Anthony Vitale, raised the idea of adding Lynch and Keating as recipients of the letter over concerns that the SGA was singling out Baker for partisan reasons.

“It seems like you’re targeting Governor Baker just because he’s a Republican and not the two Democratic representatives who can effect federal policy,” Vitale said.

A proposed amendment to the SGA’s motion would have addressed Lynch and Keating directly and changed pronouns in the letter to refer to the three politicians, rather than just Baker.

Opponents of the amendment said that Lynch and Keating’s actions would require an entirely different letter to be written, which they did not oppose the idea of, while maintaining that the motion being voted on was more relevant to Baker specifically.

Abolafia made it clear, however, that Baker’s role as governor makes him a spokesperson for the people of the state of Massachusetts and that his comments needed to be specifically opposed.

“That’s something our leader said and that’s really important,” she said.

The amendment to address Lynch and Keating did not pass the SGA Senate. After the amendment failed, there were no further questions, and the main motion passed the Senate overwhelmingly.

Roughly 14 people were present during the SGA meeting demonstrating in support of the motion. The demonstrators held signs with messages such as “Will trade 1 Gov. Baker for 10,000 refugees,” and “Refugees are welcome here.”