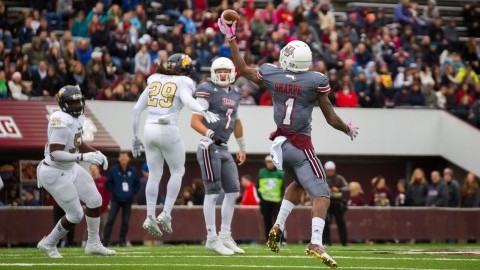 Coming off a 111-reception, five-touchdown 2015 campaign, senior wide receiver Tajae Sharpe was elected to the conference’s first team offense. His 9.3 receptions per game this season currently rank the best in the nation, while his 1,319 receiving yards in 12 games places him fifth in the NCAA.

Sharpe leaves UMass as the program’s leader in receiving yards and receptions, both marks that he surpassed this season.

Senior Jovan Santos-Knox was named to the second team at inside linebacker while fellow senior defensive back Trey Dudley-Giles made the list as second team punt return specialist.

Santos-Knox closed out his UMass career with 131 tackles and 3.5 sacks in 2015. This marked the second straight year Santos-Knox led the team in tackles, after he came off a 143-tackle season in 2014.

Dudley-Giles handled 13 of the Minutemen’s 14 punt returns, averaging 8.7 yards per return. He added four interceptions and 71 tackles as a member of UMass’ secondary.

Mills, whose versatility allowed him to line up in different spots on offense, played in 11 games and caught 33 passes for 477 yards and three touchdowns.

Seals, a senior, tallied 36 tackles, including a season-high seven against Kent State on Oct. 17.

In his first season handling all punting duties as a redshirt sophomore, Laurent shined with an average of 42.2 yards per punt, including 13 of at least 50 yards.

After senior Blake Lucas lost his placekicking job early this year, Laurent stepped into this additional role and finished 8-of-12 on field goals and 25-of-25 on extra point attempts.