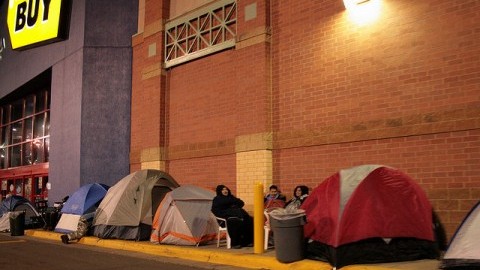 Contrary to popular belief, no one should be ashamed to shop on Black Friday. It doesn’t make you cheap, poor, desperate or immoral to give in to the capitalist forces closing in on all sides. The level of judgement passed on the hordes of early-season holiday shoppers has skyrocketed in the past few years, and I think that trend really needs to reverse out of respect for human decency.

I was in an interesting position of needing to go shopping on the Friday after Thanksgiving for an entirely different reason than most. I was on vacation and am otherwise too busy to go shopping during the day. The image of the crazy old lady in Walmart tearing the last Tickle-Me-Elmo from a child’s arms had always reversed my temptations to get good deals on things I legitimately needed, but this year urgency pressed me to my local mall.

I saw very crowded businesses, long lines at cash registers and no parking for miles. Granted, I didn’t go to a big box parking lot at 6 a.m, but the people I met were as mellow and polite as I would expect any large crowd of human beings to be. They weren’t overwhelmingly poor, violent, stupid or unethical. They were just out shopping on a Friday like you or I usually would on any other day.

This got me to thinking about the real reason we hate Black Friday shoppers. This judgment exists because the people who make statements like, “Those people need to enjoy Thanksgiving with their families,” are only saying those things because they’re desperate to have someone below them. Their own Thanksgiving dinners are filled with small talk and cell phone use, or they don’t get along with their families the other 364 days a year and are filling this void with an imaginary slice of society that must be doing worse than they are. This is why deplorable viral Youtube videos and news coverage of Black Friday violence exist. People get trampled at sporting events and concerts all the time and there are a million reasons why a scuffle could break out at the Apple Store, but post-food coma Americans are compelled to indulge in this bottom-of-the-barrel variety of people watching.

Unfortunately, this judgment flows parallel to hateful rhetoric regarding Americans in poverty. As Aly Nichols wrote last week, Black Friday is a vicious marketing stunt. It targets two kinds of people: compulsory shoppers and the working poor. Advertisements bombard our senses with examples of ideal families who are only ideal because they celebrate a rich Christmas. This immediately deflates the consumer’s sense of class aspiration, assuming they can’t afford the awesome products they seen on television. But wait. One day exists where a consumer can trade his dignity for the ability to build the happy family he sees on television. That sad cycle is to say nothing of the negative externalities of Black Friday: underpaid employees working long hours, disrupted Thanksgiving dinners, and even injuries and deaths.

I don’t think nay-sayers of these shoppers realize how they sound. They are blaming the victims of Black Friday marketing instead of the corporations who cause these problems. Our entire economy is based on the premise that consumers will buy a cheaper object over a more expensive one, yet somehow we expect people to ignore the best possible opportunity to get ahead. It’s like putting a plate of turkey and mashed potatoes in front of a hungry man and judging him for eating it.

The best advice I can give you is to go to Black Friday next year. See the people you might otherwise chastise. See that they are your neighbors, friends and fellow citizens. Engage along with them. Buy something, wait in line and save some money. Will you feel ashamed? Hopefully not.

Maybe, like me, the significance of what’s happening won’t even really occur to you until days later. It could just be a regular errand when you happen to keep a few bucks extra in your pocket. This supposedly awful thing that you’ve probably never tried can actually be as great as you want it to be. I think that logic can apply to a lot of other things in life as well as Black Friday.