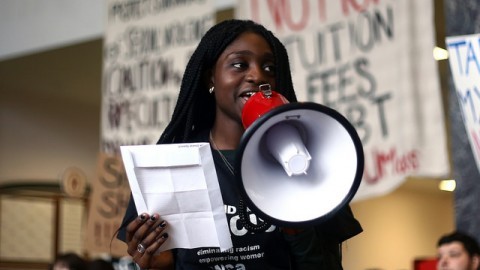 Andrea Nyamekye is a junior wildlife conservation management major at the University of Massachusetts. During her studies, she takes in time to participate in Divest UMass, a student organization demanding the University to divest from fossil fuel.

What do you study at UMass and what do you on campus?

I am Andrea Nyamekye. I am a third-year at UMass studying wildlife conservation management and minoring in art history. On campus, I am a part of the UMass Fossil Fuel Divestment Campaign, which is trying to get the University to divest from the top 200 publicly traded fossil fuel industries and reinvest that money into renewable forms of energy.

What kind of interesting things have you learned so far?

I think the most interesting thing I learned in natural resource conservation (was in) my class Forest and People. That class was very much about what we have done in the past to ruin the Earth and ways we can fix it. It talked a lot about the forest, but it also focused on the people and it made me think of the groups of people that we were harming when we were cutting down acres and acres of trees and then exporting trees from other communities. It really incorporated the people and social aspects and it wasn’t just about the science.

Could you talk about the Divest UMass organization and your role within the organization?

The organization has been around for two and a half years. My role in the organization is that I am on the board of the organization. I focus on ways we can communicate with administration and board members, setting up meetings and talking to them in more transparent forms than in the past.

The organization is based on the people and how climate change is affecting the people, as opposed to just affecting the planet with melting ice caps. The point is that we need to divest from fossil fuel industries in order to help people who have been impacted by those industries. For  example, in Kenya, oil and gas companies have been going into (Kenyan) land since 2011, and they were promising Kenyans jobs and wealth, but it turns out that these fossil fuel companies weren’t giving those jobs or giving it to specific communities, and now it’s causing a lot of rivalries between the communities that didn’t exist before. It is also causing complete deforestation of their lands; they don’t have fresh drinking water because the oil and gas companies have been polluting their lands.

The aim of Divest UMass has been to bring out that story; we need to divest from these fossil fuel industries for the people whose lives have been impacted because of the drilling and fracking, so they can have that livelihood again and be able to live on their land and get clean water, without having these large companies impose on their land.

What kind of actions would you suggest other students to take to bring change?

So far what we have done with the student body is we had a petition in support of divestment. I’m pretty sure we got roughly three thousand student signatures. We also had a petition for nonviolent direct action, which means if Divest needs help for an action, we have those people to call on. We got signatures for that. We also had faculty create and sign an open letter (in support) of our campaign. We also had the graduate student union do that as well.

How dangerous are these changes in the climate?

I don’t think people fully understand what (climate change) means because it’s not impacting them immediately It’s starting to affect Massachusetts because there are two pipelines that are running through West Roxbury and through the Pioneer Valley that is starting to impact the livelihood of people who live and farm here and rely on their land.

Climate change is impacting California; they have been in this drought since May. Texas had ridiculous floods that should not have happened. In India this past summer, the roads were melting because they were having a heat wave of 114 degrees Fahrenheit. A lot of people were dying because of the increasing temperatures. There was heat waves in most of Europe as well. The fossil fuel industries are heightening the rate of climate change because we’re burning way too much carbon than our oceans and trees can actually take. If we divested and find renewable forms of energy to power our homes and buildings, we would reduce the amount of carbon that is emitted into our atmosphere and reduce all of those extreme weather events that we have been seeing across the country and the globe.

Alternatives could be solar energy, geothermal energy, hydropower and wind turbines. I know that wind turbines and solar panels are expensive to implement, but in the long run, you do get money back if you’re creating more energy than what you are actually using.

Can you describe the speech you made during the Million Student March?

My speech was about my experience coming into the divestment campaign and how I’ve grown since then. I started off the speech on how I felt when I first entered the divestment campaign, which I was only thinking about climate; only thinking about the melting of ice caps and ocean acidification. I never thought about how climate change is affecting people. After being in my Forest and People course and watching “Taking Root: The Vision of Wangari Maathai”, I began to understand that climate change is not just about deforestation. All of those things are impacting people.

How is the overall experience in the campaign?

It’s been great being in this campaign. I met a lot of extraordinary people that are way more passionate than I am and willing to take the time to hold these fossil fuel companies accountable and take the time to understand what communities that have been affected need. It’s been a very eye opening experience for me.

Do you have any advice for students who might want to see some kind of difference on campus?

My advice would be to think critically about the way things work in our society. If they do see a problem in society, they should try to fix it because we are the next generation of leaders in this country. We should be doing things that benefit not just us as we get older, but future generations to come.