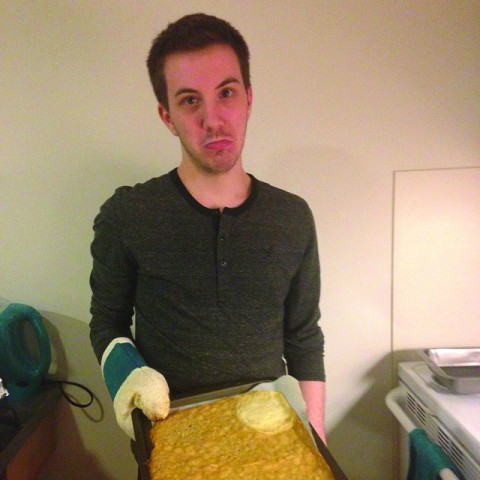 If you asked me six months ago, I could’ve told you how I wanted to start my senior column. But sitting down now, I don’t know where to begin.

Should I write about how thankful I am for the opportunity to work at such a wonderful place? The uniqueness of a college newsroom? Everything this place has taught me, about journalism, about myself, about life?

There’s also all the friends I made here. Every person that touched my life. All the great laughs we had, every joke we made, every party we had. The friends I never expected to make but that I love like family members.

The Collegian was my home.

In September 2012, I was a nervous freshman, tasked by my father to go to the school newspaper.

“If you want to be in journalism, you have to start getting clips,” he told me.

While initially I thought about following my father’s footsteps and working at the college radio station, I ended up walking into the Collegian during the second week of my freshman year through some twist of fate. Little did I know how life changing that decision would be.

The Collegian is truly about the people. Every writer and every editor is a member of a very special group, filling the newsroom with a particular energy that is so welcoming and comforting. As intimidating as it was walking into the newsroom as a freshman, I’ll never forget watching writers and editors bustle around the office and knowing I found my place – a feeling that was solidified during coverage of the 2012 presidential election. The excitement that filled the newsroom, the fast pace of news coming in, covering my first “Southwest gathering” and staying in the office until 5 a.m. (only the second latest I ever stayed in the Collegian) proved to me that I had journalism in my blood, and the Collegian was my home.

Two years later, I was in charge of that newsroom, as managing editor, and it was the proudest day of my life the first day I saw my name listed as such. Some people say Disney is the happiest place on Earth. For me, it was the Collegian, and running the newsroom was a dream come true.

Working in the Collegian transformed me from a low-confidence teenager to a strong-willed young adult, through the different people I met, the friends I made and the experiences I had. It’s a place like no other I’ve ever been, and from what I’ve been told, I’ll never be again. The real world, a professional newsroom, is vastly different from a college newsroom. Gone are the late nights of just talking and eating pizza. You can’t have an ‘80s-themed party on the weekend, and when you’re in a professional newsroom, you’re expected to be doing work – nobody comes to the newsroom just to hang out and see their friends. The college newsroom is a special place, and to me, the Collegian is the most special of all.

It’s hard to put into words how much the Collegian has meant to me, and how I feel about it, especially while avoiding a minefield of clichés. The hundreds of hours I spent in the basement offices were some of the best times of my college career, even when it was 3 a.m. and the arts staff hadn’t finished the Halloween issue. I was in the office even when I didn’t need to be – eating lunch, taking naps on couches or doing homework. I spent more time in the Collegian office than I did in my own dorm or apartment (I haven’t done the math, but I can pretty much guarantee it).

The saddest part about leaving the Collegian: I expected to be writing my senior column in April, rather than December. But as quickly as fate brought me to the Collegian offices, it’s whisking me away on my next adventure. I’m scared, excited and sad, but I know I’m ready.

I’ll miss you, Collegian. But we’ll always have Amherst.

Patrick Hoff was the managing editor, and can be followed on Twitter @Hoff_Patrick16.