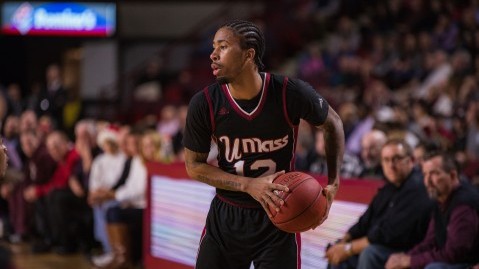 With former Massachusetts men’s basketball coach John Calipari and five members of his 1996 Final Four team in attendance Wednesday night at the Mullins Center, it’s easy to understand if there was any added pressure on the current Minutemen to perform.

But for UMass senior guard Trey Davis, getting his phone’s data turned back on was the only thing he was worried about.

Davis exploded for 40 points in Wednesday’s 103-95 overtime victory over New Orleans to set a new Mullins Center record that was originally held by Marcus Camby – who was in attendance – and help the Minutemen end a three-game skid.

“Forty is 40. Whatever way you want to slice it, that’s a lot of points” UMass coach Derek Kellogg said. “There’s been a lot of really good players to come through these doors out here. Whether it’s Lou (Roe) or Camby or Tony Barbee, a lot of different guys have put up some big baskets.

“For him to score 40 in this arena and be the first one to do it is … we are playing a different style and tempo and those guys have more opportunity with the 3-point shot and different stuff.”

According to Davis, following UMass’ loss to Florida Gulf Coast last Sunday, his mother Melissa was frustrated with his play and decided to temporarily turn off his phone data plan shortly after the game. It was something that Davis took seriously following a 4-of-16 shooting performance.

“She was mad so she just turned my phone off and told me, ‘Get it together.’ First I was mad but then I just accepted it,” Davis said. “She said, ‘Why are you missing your free throws, missing your jump shots?’”

After a record-breaking night Wednesday in which he shot 10-of-18 from the floor and 18-of-20 at the free throw line, Davis said he received welcoming news from his mother.

UMass struggled all game with its half court defense against the Privateers but Davis’ 17 first half points gave the Minutemen a 41-39 advantage heading into the break. With UNO continuing to hang on in the second half to send the game to overtime, Davis’ six free throws in the extra frame helped UMass clinch the win.

Davis was stuck at 38 seconds in the waning seconds of overtime when he sprinted down the court, was inbounded the ball and fouled on the layup attempt to send him to the free throw line. With two seconds left, he made both attempts to reach 40.

“Trey took that last two, I think he was looking up at the scoreboard,” Kellogg said.

But against the Privateers, it was driving in the lane that propelled him.

“I was getting to the basket early and I think that really got me going,” said Davis, who finished 2-of-8 from 3-point range. “Once I did that, it opened me up for 3s.”

Davis combined with Donte Clark (a career-high 30 points) to score 70 of UMass’ 103 points Wednesday. Center Rashaan Holloway was the only other Minuteman to reach double figures while third-leading scorer and starting point guard Jabarie Hinds was limited to six points before fouling out late in the second half.

According to Kellogg, the performances by Davis and Clark were especially crucial with surrounding pieces struggling to get going offensively.

“We need those guys to score. I thought that those two and Rashaan were our only offense throughout the game,” Kellogg said. “We are still looking to find those next options.”

With more than two years of college eligibility left for Clark, the sophomore joked that he’s now trying to surpass Davis’ Mullins record. But before Clark could finish his thought, Davis quickly jumped in to dispel the notion.