UMass Foundation to divest from direct investments in coal companies 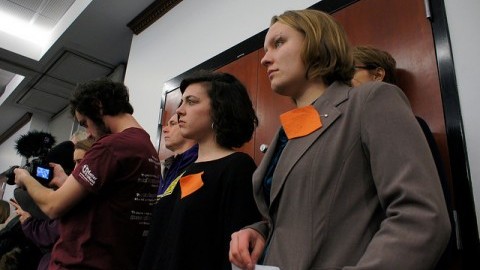 The UMass Foundation announced today in Boston that UMass will divest from direct investments in coal companies.

The foundation oversees $770 million in endowment assets for the UMass system, according to a news release. The decision follows years of pushback by the UMass Fossil Fuel Divestment Campaign, which demands that UMass divest from the top 200 publicly traded fossil fuel companies.

“We believe this action sends an important message about the urgency of climate change and the University community’s commitment to addressing it,” Charles J. Pagnam, executive vice president of the UMass Foundation said in the release.

He said implementation of this policy is part of the organization’s larger mission to maximize investment returns on endowment funds donated for academic programming, financial aid and research.

UMass Foundation spokesperson Pamela Jonah said in an email that direct coal investments represented a small portion of the Foundation’s investment portfolio and that the holdings will sold as soon as professional managers are able.

Divest UMass, the group organizing the Fossil Fuel Divestment campaign, submitted a formal petition asking the foundation to divest in March. Members of Divest UMass met with the Socially Responsible Investing Advisory Committee, the group that recommended the divestment from coal to the UMass Foundation’s Board of Directors.

The Divest UMass organization is pleased with the foundation’s announcement, but note that their demands have not been fully met.

“This is a step in the right direction,” says Divest UMass member Allison Rigney. “But it’s not exactly what we asked for. We’re continuing to ask for full divestment from all holdings in fossil fuel companies.”

The three-year-old divestment campaign aims to highlight not only the environmental impact of fossil fuels, but social injustice they believe is caused by fossil fuel industries.

Rigney said the fight is not over yet. “We’re still going to keep up the pressure and we’re not going to stop because they gave us this one thing.”