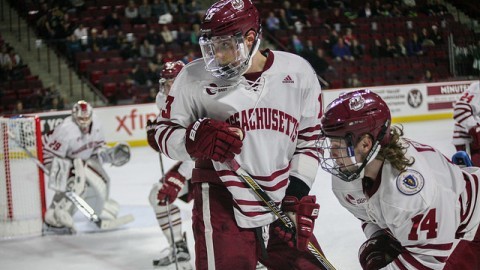 The Massachusetts hockey team has played more games on the road than any other team in the entire country this season.

Specifically, the Minutemen (6-7-4, 2-4-4 Hockey East) have played six of their last seven games away from home. They went 0-4-3 in that stretch and have fallen into a four-way tie for sixth place in Hockey East with eight points.

Friday night, UMass will finally be back out on the Mullins Center ice when it takes on nonconference opponent Union, which won the national title in 2014.

Both coach John Micheletto and captain Steven Iacobellis voiced their excitement when asked how it felt being home.

“It seemed a little strange to be honest with you,” Micheletto said after practice Monday. “The other nice thing will be a single-game weekend, which we haven’t had for a while. I’m sure our guys will look forward to being in front of some friendlier faces on Friday night, even if it is against another team that’s got it coming pretty good right now in Union.”

“It’s going to feel good,” Iacobellis added. “We’ve been away for quite some time now, I think we’ve had maybe less than four games at home or something, at least that’s what it feels like. It’ll be nice to be home, sleep in our beds, so we’re looking forward to that.”

While Iacobellis was slightly off (the Minutemen have played five games at home, excluding the exhibition versus Dalhousie), there is no doubt UMass will look to come out firing against a versatile team like the Dutchmen (5-6-4, 2-5-1 ECAC).

“You look at the results that they’ve had against different kinds of teams, they can play a fast game, they can play a heavy game,” Micheletto said. “It’ll be a difficult challenge because they’re always well coached under Rick (Bennett), so we’re going to have to hope we can get out and play a little faster than they do. We’re mostly just trying to be the best version of us that we can.”

Over the course of the past five games, the Minutemen have only scored four times, despite generating many chances against some stiff competition.

The latter is the option that applies to UMass.

“It’s a matter of our guys continuing to believe in the process and how they put themselves in position to score goals,” Micheletto said. “We were talking to certain guys about just the little things that we can dial them in on and try to make sure they’re focusing on the process of scoring goals as opposed to worrying about the result of scoring or not scoring.”

Iacobellis echoed these thoughts, saying a primary focus in practice this week was scoring.

“We really focused on putting the puck in the back of the net and getting to the dirty areas,” he said. “I don’t think that’s something as a team we’ve done efficiently enough. I think that’s going to be a key part of this weekend.”

There are no conference points at stake Friday night, which allows Micheletto and the rest of the team to take a step back and evaluate what hasn’t gone their way over the last couple of weeks.

“I think that’s an ongoing process. When you’re a coach, you’re always looking at not only who you’re playing against that upcoming week, but trying to continually assess and evaluate your guys and how to make them better individually as well as a group,” Micheletto said.

“I don’t want to lose sight or the perspective that us and most everybody else had that points on the road in league competition were a good thing a couple of weeks ago and now all of a sudden people want to paint them as not so good. As long as we move on, I don’t have that much concern about where our guys are.”