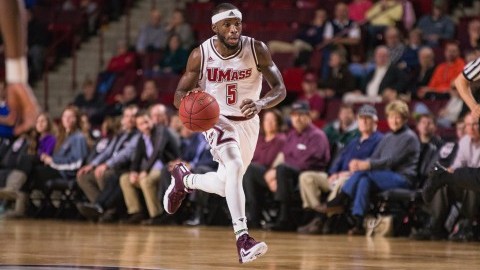 The last time the Massachusetts men’s basketball team lost to Boston University, Ronald Regan was in office, no one on its current roster was even born yet and coach Derek Kellogg was a student at Springfield Cathedral High School.

After suffering its first loss of the season last weekend in the championship game of the MGM Grand Main Event to Creighton, UMass returns to action after a full week of recovery and rest, something that Kellogg believes is important at this point of the season.

“The time off was great. I think we were exhausted coming back from Las Vegas. As coach (John Calipari) always used to say, ‘If I feel a certain way as a head coach, I can only imagine how they feel from the travel and the energy and excitement in playing so many games in such a short period of time.’ I think we’re all tired,” Kellogg said.

BU enters Wednesday’s game coming off of a 10-point win over Binghamton Saturday on the road. Prior to that, the Terriers fell against Calipari’s No. 1 ranked Kentucky 82-62.

Wednesday marks the fifth consecutive game BU will play away from the state’s capital.

Similarly to the Minutemen, BU relies heavily on its experienced guards led by senior John Papale and sophomore Cheddi Mosely. Papale leads the Terriers in scoring averaging 15.7 points per game while Mosely follows close behind with 15.3.

In addition to Papale and Mosley, BU has two players averaging over double-digits in scoring with Kyle Foreman (12.2) and Nathan Dieudonne (11.7). Foreman’s 32 assists are most on the Terriers while Dieudonne’s 35 rebounds are a team-high as well.

“Their guards are as good as we played, the three of them. Then their four-man really facilitates from that elbow and knows how to play,” Kellogg said.

Now that both Rashaan Holloway and Malik Hines have had a handful of games under their belts as freshmen, and with UMass looking to attack the post more often, Kellogg thinks that moving forward a bigger lineup could help against smaller teams moving forward.

With the Terriers running a primary three-guard offense, it will be interesting to see if Kellogg attacks them with his big men or plays it safe and matches with the three-guard combo of Trey Davis, Jabarie Hinds and Donte Clark.

“That’s something in my head as I see the season unfold. I’m looking forward to that being our advantage when you play a team that’s smaller than you. I’m not sure that we’re at that point yet but that’s the goal over the period of the program,” Kellogg said.

Despite the focal point of practice this week being for the Minutemen to work the ball in the post, Hinds is expecting another up-tempo game against BU.

“It’s probably going to be an up-and-down game,” he said. “I’m not sure if they push the ball up as fast as we do but we’re going to be focused on the defensive end.”

Tip off from Mullins Center is set for 7 p.m. Wednesday.