UMass students weigh in on decision to honor John Calipari 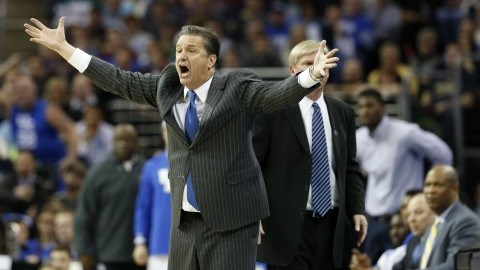 One day before the Massachusetts men’s basketball team’s jersey retirement ceremony in honor of former coach John Calipari, the question remains: With a mix of on-the-court success and controversy that led to a vacated Final Four run, is the decision by UMass to recognize him the right move?

Boston Globe columnist Dan Shaughnessy has already made his viewpoint clear – twice – including his column Monday that once again pointed at Calipari’s supposed involvement in a 1996 scandal featuring Marcus Camby, the Minutemen’s best player. Camby was found to have accepted impermissible benefits from an agent and the NCAA stripped the Minutemen of their 1996 Final Four appearance.

UMass basketball quickly fired back on its Facebook page against the column and Calipari himself called into WEEI’s Dennis & Callahan Show Tuesday morning and responded to the backlash, saying he had no previous knowledge of Camby’s actions.

But what are the students on campus thinking about the ceremony?

“It’s good because he brought us to the peak of where you want to be. Just him tweeting about you gets you more recognition and gets you better players,” sophomore Matt Stromski said.

The general consensus among UMass students is favorable for the decision to honor Calipari, despite any black cloud of previous NCAA violations.

Stromski is a member of the Mullins Militia, an independent student group that makes up the students’ section at every home basketball at the Mullins Center behind the left baseline adjacent to the opposing team’s bench.

He argued that infractions such as those that erased UMass’ tournament run in the 1990s can be found across the nation at a number of Division I programs. He pointed at Camby’s No. 21 jersey retirement in 2013 as further justification for Calipari’s recognition.

“It happens at every school. There’s all that other stuff going on at every school,” Stromski said. “They already retired Camby’s number so why not honor (Calipari)?”

“If anyone deserves to be honored here it’s him,” she said.

“I’m for it. I can understand the desire to honor John Calipari. He was the coach that put us on the national map,” Gogol said. “UMass was, I don’t want to say nothing before that, but they were small time. People knew UMass because of Marcus Camby, John Calipari and the Final Four.

“We were known for basketball, and like it or not, it was a great recruitment tool. And it continues to serve as such.”

Gogol added he was surprised to hear that the University would hold Wednesday’s halftime ceremony considering the general approach by colleges to “steer clear of anything close to controversy.”

“Colleges are not usually proactive, they’re very reactive,” he said. “So I’m surprised they would wade into the waters of honoring him. I’m not saying good or bad on them, it’s just kind of interesting that they would do that.”

But not all students are supportive.

Senior Lauren McArdle, a former contributor to the Daily Collegian, said that success isn’t an excuse to “look the other way,” and that coaches that allow these types of situations to occur are “deplorable.”

“His oversight and/or negligence led to our 1996 appearance to be vacated,” she said. “Just because he brought us to the big dance and built up the program doesn’t excuse his oversights.”

Other students maintain a sense of disinterest about the situation.

Senior Alex Pimentel said that while Wednesday’s celebration will present an opportunity for the school to “relive the glory days of the Final Four,” he will not be in attendance and leans in neither direction in terms of whether Calipari garners the recognition.

“I’m kind of impartial to it,” Pimentel said. “I think it’s good for all his accomplishments but it doesn’t really matter to me to be honest.”

For the student body that doesn’t know too much about Calipari’s tenure with the Minutemen, Stromski said Wednesday’s ceremony will allow casual fans to learn about his accomplishments. Gogol agreed and added that he hopes it will re-spark interest in the team moving forward.

“I think they only care when (UMass) might go to an A-10 championship or has a player of a generation, like a Chaz Williams or Marcus Camby, where people start having a real interest in the team,” Gogol said. “Hopefully those in attendance can grasp what has occurred with our basketball program by honoring John Calipari.”

Calipari will be in attendance for Wednesday’s halftime banner raising ceremony in what is part of a 20th anniversary celebration of UMass’ 1995-96 Final Four team. In nine seasons, Calipari amassed 193 victories.