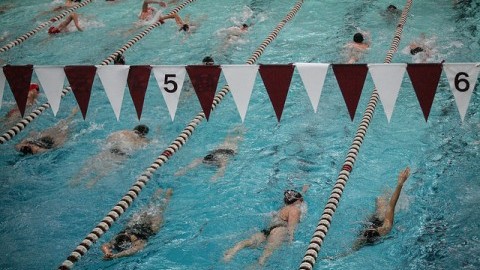 With 12 weeks down and 12 to go, the Massachusetts men’s and women’s swimming and diving teams have reached the midway point of their long seasons.

Following a dominating performance in the Terrier Invitational where the Minutemen finished first out of seven schools, they will have over a month-long break from competition. While it sounds all good and relaxing, this hiatus can be just as strenuous as any match they partake in.

With students at UMass preparing for finals and the stress that comes with them, student-athletes aren’t granted any immunities. On top of academics, the Minutemen need to find a way to stay on top of their conditioning and training as well.

The real challenge for UMass at the midseason break is maintaining its level of fitness that it worked toward in the first half of the season.

“It is really important that we maintain and hopefully improve and I think with the team culture and the attitude we got that we will be able to improve,” Yarworth said.

Improving would elevate the team to a new level of competitive swimming. The Minutemen finished first in their first two invitationals they performed in with Owen Wright dominating in the conference time sheets.

Wright’s 20.54 50-meter freestyle time – that he swam at the Terrier Invitational –– is the second fastest in the conference while Wiktor Karpinski’s 20.94 time in the event is good for sixth.

UMass ended the first half of the season on as high of a note as it could have when it came in first place all three days of the Terrier Invitational from Nov. 20-22.

“I think the midpoint check mark of going to the Terrier invitational and swimming well was a pretty positive statement of progressing to where I want us to be,” Yarworth said.

While winning is always a plus, the Minutemen’s focus is not on the invitationals, but rather the conference championship. The Minutemen hoisted the Atlantic 10 trophy last season and are favored to repeat again this year. Competing in the invitational is what prepares them for that moment, according to Yarworth.

“Everyone likes to win, that is the goal, but that not the focus, the focus is the process we are in to get to the end of the year, when the championship is the goal,” Yarworth said.

With UMass in much better shape following the first part of the season, Yarworth said he looks to challenge the team more in order to further prepare them for the A-10 tournament in February.

The Minutemen’s next competition will be at Bryant University on Jan. 16.

Consistency is key for Minutewomen

The Minutewomen finished fourth in the Terrier Invitational capping off their first half of their season.

Coach Bob Newcomb enters the midseason break with an optimistic attitude about his team’s performance to this point.

“They worked really hard and have gotten very good results at the Terrier Invitational,” Newcomb said.

Much like the men’s team, the Minutewomen need to focus on sustaining their current condition amidst all of the challenges that finals week and winter break brings.

Newcomb stressed the need for the Minutewomen to be consistent and diligent in their workouts.

“The thing about the first half of the year up until the Terrier, it’s consistent,” Newcomb said. “Now we have four days off for Thanksgiving, we have exams coming up which can be up-and-down with their schedules and then you have 10 days when they’re home.”

Newcomb calls those 10 days as “unnerving” for him because of how much rides on what his swimmers do when they are on their own at their homes.

Newcomb believes it to be the most difficult part of the season for UMass.

When on campus, he tries to keep practices as consistent as possible.

The midseason break will feature a weeklong training trip to Puerto Rico between Dec. 29 and Jan. 7. Newcomb made it clear that the training will be very intense and physically demanding.

The Minutewomen will continue competition Jan. 8 when they host Rhode Island.

“The conditioning is there and it’s just going to get better. How fast can you go?” Newcomb said.