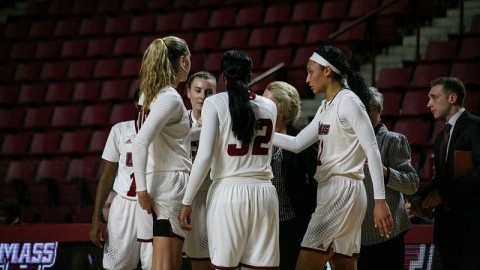 In college basketball, halfcourt defense often separates the contenders from the rest of the field.

Although it’s early in the season, the Massachusetts women’s basketball team has often found itself on both ends of that spectrum.

From giving up more than 80 points two games in a row at the Omni Hotels Classic to convincing wins against Holy Cross and Bryant, UMass has seen glimpses of hope for the future and has also experienced lapses of concentration throughout the young season.

“I think it all comes down to us staying fresh and talking on defense,” UMass coach Sharon Dawley said. “When we talk we are a very sound defensive team. We need our leaders to step up and talk and give us a lot of energy on Wednesday.”

The Minutewomen look to build on their defensive success from last Wednesday’s 86-69 win over Bryant and search for its first winning streak of the season when they take on Hofstra (7-1) Wednesday night at Mullins Center.

“They have really strong guards so stopping them will be a major focus for the game for us,” Dawley said. “They are very talented and have the ability to take over games, so we need to make sure we keep them in check.”

The Pride head into Wednesday’s game in the midst of a three-game winning streak. Hofstra had little trouble dispatching of Coastal Carolina with an 82-40 win Nov. 28 and had similar success against Buffalo last Thursday in a 79-36 victory.

Dawley is cognizant of the Pride’s success so far this season but is hoping UMass comes out strong especially on the defensive side of the ball. She stressed the importance of containing the Pride’s guards and limiting the penetration into the lane.

Dawley is hoping the momentum the Minutewomen gained from the win against Bryant will carry over to Wednesday’s game.

“A win like that gives you a lot of confidence in terms of shooting,” Dawley said. “We also shared the basketball very well and our assist to turnover ratio was very good. I think all of these things bode well for us to be successful moving forward.”

Hofstra will look to free up its shooters behind the arc against UMass. Loftus has knocked down 21 3-point attempts this season, while Luciano has made 19 from deep range.

“There are many ebbs and flows throughout the game, so as long as we stay cohesive as a team and work together to get defensive stops we should be fine,” Minutewomen sophomore guard Alyssa Lawrence said.

The Westchester, New York native and San Diego State transfer had a career-high 20 points against the Bulldogs last week. Lawrence is averaging 9.8 points a game this season, the third highest mark on the team.

However, despite having a career day against Bryant, Lawrence said she wasn’t too focused on making sure she repeats her impressive performance.

“I don’t really focus on stuff like that,” Lawrence said. “My teammates are the ones putting me in the best places to succeed, so I think it’s more important that we stay together and play off of each other to find success. If we all are confident in each other and playing freely, it will take the pressure off of us and we should play a great game on Wednesday.”

Wednesday’s tipoff is set for 7 p.m. at Mullins Center.

Adam Aucoin can be reached at aa[email protected] and followed on Twitter @aaucoin34.