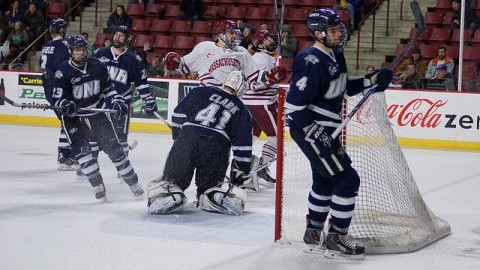 After a 3-3 tie in the opening game of their weekend series with New Hampshire, Maine traveled to Durham Saturday night for game two of the rivalry, but the Black Bears were bested by the Wildcats in a 5-2 defeat.

Poturalski, the nation’s leading scorer with 14 goals and 16 assists in just 15 games, got the scoring started for the Wildcats just three minutes, 29 seconds into the contest. Gaudreault followed this with another goal shortly after to put UNH up 2-0. Maine (4-9-4, 2-5-1 HEA) was able to answer with a goal from Cedric Lecroix to cut the lead to 2-1 after the first period.

The Wildcats made the most of their scoring opportunities in the second period. Gaudreault got his second goal of the contest 13 minutes into the period. Ara Nazarian scored on a power play two minutes later, giving UNH a 4-1 lead.

Maine wasn’t able to generate much offense in the third – their lone goal came with just three minutes to play from Steven Swaverly. Poturalski’s second goal came with under a minute to go to provide the 5-2 final.

As is typical with rivalry contests, there were multiple points where this game got very physical. A scrum at the end of the first period sent four players to the penalty box for a combined 16 minutes of penalty time.

New Hampshire will look to build off the win Friday night when they take on Dartmouth. Maine will have to wait over three weeks before their next game, where they will take on UNH in hopes of avenging Saturdays loss.

Northeastern takes BC to overtime

Northeastern gave No. 3 Boston College all it could handle Saturday night, taking them to overtime where the game finished in a 3-3 tie.

The Eagles (13-1-1, 6-0-1 Hockey East) got out to a hot start, taking a two goal lead by the midway point of the first period on goals from Miles Wood and Alex Tuch.

It was looking like another BC blowout was about to take place, but Nolan Stevens found the back of the net for Northeastern (2-12-3, 0-8-3 Hockey East)  just 30 seconds after the Eagles made it 2-0.

After a scoreless second period, Northeastern went on the attack in the third, and Lincoln Griffin tied the game for the Huskies with 11:28 remaining in the game.

The BC penalty kill unit had an excellent day, not allowing any goals on six Northeastern power plays. They were tested, having to kill off a five-minute major in the second period as well as a 5-on-3 power play in the third period. The highlight of the penalty kill came with a shade under nine minutes to play, when Colin White stole the puck and scored the go-ahead goal on a breakaway. This short-handed goal put the Eagles back on top, and seemed to take the steam out of the Northeastern attack. The goal extended White’s scoring streak to nine games.

Playing behind for most of the period, Northeastern was forced to put the puck on net as often as possible, outshooting the Eagles 15-4 in the third period. And with just 2:14 left in the game, Steven collected a rebound and put it into the net for his second goal of the game, tying the game 3-3 and forcing overtime. Neither team could find the net in the extra period, where the game finished in a tie.

In Sunday’s series finale between the two teams, Northeastern took a 3-1 lead into the third period, but three unanswered goals from BC gave the Eagles a come from behind 4-3 victory. Matthew Gaudreau scored the game winning goal for BC at eight minutes, 22 seconds of the final frame to complete the comeback.

Northeastern will look to build on their near upsets next weekend when they face Michigan State at home. Boston College takes on Notre Dame Thursday night for their final game before Christmas break.