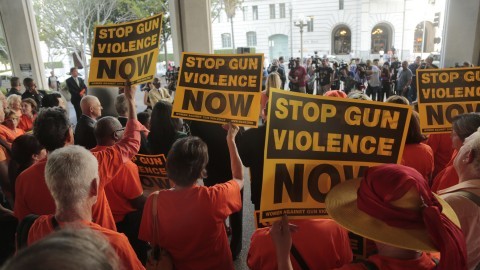 The New York Times ran an editorial on the front page of its newspaper Saturday.

The editorial, titled “End the Gun Epidemic in America,” addressed the country’s most recent mass shooting, in San Bernardino last Wednesday. The editorial board argued that the country needs to impose stricter gun regulations and criticized politicians for voting down gun control measures.

This is the first time an editorial has been on the front page of the New York Times since 1920.

Traditionally, most newspapers do not run editorials on the front page. It gives off the wrong impression. Editorials argue. They pick one side over another and attempt to convince the audience to do the same. Creating an image for the readers that the entire paper agrees on a divisive issue, such as gun control, can be conflicting for the readers, who often demand less partisan material.

By putting an editorial on the front page, the impartiality that a newspaper strives to uphold is called into question because it seems like the issue is of significant importance to the paper above others. The paper takes a more political stance than it typically would.

So why does it matter that one of the most prestigious newspapers in the world put an editorial on the front page? It matters because it means that it doesn’t care if you think it is trying to convince you of something. Which means, in short, the issue is of incredible importance.

With this article, the New York Times is putting its reputation on the line. Its editors are saying that this issue is important enough to all of them that they do not care that it is not impartial. The Times is making a statement. The New York Times said, in its own words that, “it is a moral outrage and a national disgrace that civilians can legally purchase weapons designed specifically to kill people with brutal speed and efficiency.” The editorial board dared to say that the United States of America is not trying. They did not say we are not trying hard enough. They said we are not trying at all.