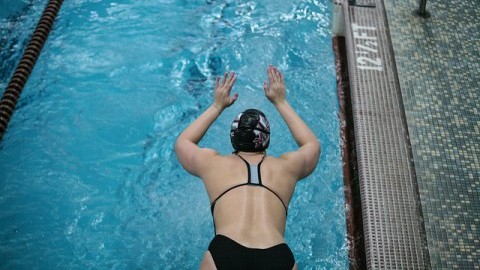 There are plenty of reasons to believe that both the Massachusetts men’s and women’s swimming and diving teams will falter this coming weekend at the Dartmouth Invitational.

Neither the Minutemen or women have competed in an invitational in two months, classes have started this week and despite the long, intense training, it’s been a while since they’ve had any competition against opposing schools.

Despite the odds however, there is still reason to believe the Dartmouth Invitational will feature some of UMass’ best performances of the season.

According to men’s coach Russ Yarworth, this weekend will be used to evaluate his swimmers and further determine which of the 17 he will pick for the Atlantic 10 tournament.

While the swimmers did have quite a long midseason break, there was hardly any halt in training.

All of this training that the Minutemen and Minutewomen have been doing since October are in the name of preparation for the end of the season.

How UMass and its individual swimmers prepare for an event, or even for a portion of the season, can have a serious impact on where they finish come conference tournament time in mid-February.

In order to succeed in this part of the season, much of the preparation is going to be rest. Unlike other teams, swimming and diving’s season is drawn out and really lasts throughout both the fall and winter sport seasons. With that said, the swimmers are training often and it usually starts to take a toll around this time. In order to keep performing at a high level during arguably the most important stretch of the season, it’s important for the players to get their rest.

Yarworth hopes this rest will yield even better performances.
“Once we are starting to get into our rest period of the year hopefully I will start seeing some good performances,” Yarworth said.

The resting period is just a different way the Minutemen and Minutewomen go about training and preparing for the future parts of the season. Instead of having heavy workouts, the athletes focus more on the fine aspects of swimming such as skill and mental preparation.

“Making sure they know what their routine is going to be with their warm up and competition, warm down preparing for the next day because we are going for a four-day meet. You have to have a plan together and everything we do in practice is to help to plan for that,” Yarworth said.

Yarworth added that winning isn’t the “primary focus” this weekend at the Dartmouth Invitational. He instead stressed that it will be used to see how the swimmers perform with less than a month before the A-10 tournament beings.

The Dartmouth Invitational offers the swimmers a chance to compete against multiple opponents over the course of two days. The men’s team will be competing against Boston College and Dartmouth while the women will face the same schools with the addition of Northeastern.

Both teams are coming off dominant performances at Bryant University last Saturday. The Minutewomen also had a two-day dual meet at home against Rhode Island the week before in which they came away with a 159-140 victory.

Both teams last faced the Eagles in the Terrier Invitational in November. The men’s team finished first out of seven while the women finished in fourth place.

UMass only has two more events left following the Dartmouth Invitational before the A-10 tournament begins Feb. 17 in Geneva, Ohio.