The dual nature of fraternities on campus 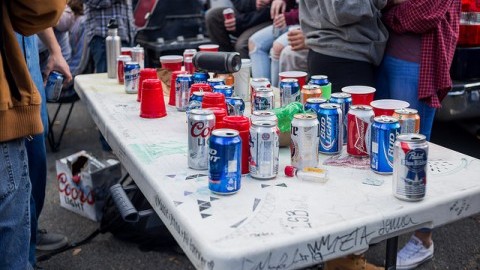 I lost my frat-ginity last weekend.

No, I didn’t wake up face down in a basement with vomit on myself and more shame than I know what to do with; I’m just saying I went to a fraternity house for the first time. I was surprised it took me so long to actually attend a frat party. I never considered joining a fraternity, but I did expect to have visited one at some point during my first semester of school.

Greek life and social life are not synonymous at the University of Massachusetts, but it’s worth noting that the fraternities and sororities here do have a strong presence on campus. That being said, we still can’t make up our mind about whether or not we like frats. Members of frats swear by the brotherhood and cite the community service-based activities they do as examples of the benefits of their organizations. Non-members of Greek life tend to view frats with a little more scrutiny. It’s easy to get sucked into the horror stories of fraternities from around the country. If you Google “hazing lawsuit” you will  find a different story with each hit.

But do frats deserve the reputation that has been handed to them? Maybe. I can vouch for their community service. Greek life is frequently on campus raising money for causes and it is impressive what can be accomplished when people put their collective efforts toward bettering the world around them.

I can also vouch, albeit from a small sample size, for the general disgusting nature of the particular house I was in. I can’t remember which one it was because I didn’t have enough energy or incentive to memorize which house is which or what the Greek letters hastily hammered to the side of the house said.

I can remember, with great detail, the bathroom, which included a broken toilet that just was collecting a vat of urine that people were haphazardly adding to. I remember the living room looking more like the set of “Sons of Anarchy” than a living arrangement. I remember empty bottles of hard alcohol hanging on the walls the way a hunter may put up taxidermied deer.

But then, toward the end of the night, as a brother politely asked me to stop using my elbows so much when dancing because it was “scaring the girls,” I realized that we’re all part of the grime.

We go to frats to be the worst version of ourselves, which is fun in its own right. It is easy to pass them off as scummy, but however true that description is, it’s because that’s what we expect when we go.

If everyone is going with the intent to be gross, grossness will occur. Frat houses are almost cathartic in this way, so I feel like they’re almost a necessary part of a campus. However, after going once I understand why it falls under the category of “try it once” instead of “do it every night” for most people. In keeping with the Greek theme, I’ve flown close enough to the sun for a while.