The hidden cost of fast fashion 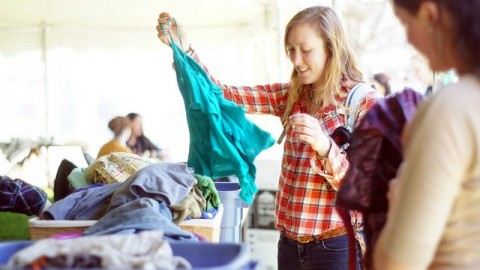 I was always interested in fashion growing up. My family often joked that I got my love of shopping from my mother, who always appreciated a good sale. My father, on the other hand, held loyalty to only a few brands, including Banana Republic. But one day, several years ago, my father cut up his Banana Republic card. He vowed to never shop there again and has not shopped there to this very day.

Why? Because my father uncovered the truth behind Gap, Inc.’s “empire” (which includes Banana Republic, Old Navy, Athleta and Piperlime): It uses child labor and refuses to stop.

In October 2013, the Bangladesh Safety Accord was signed in the Netherlands by over 200 brands from over 20 countries. This accord was created to ensure safe working conditions in Bangladesh factories. It had six parts concerning safety and that companies must give public disclosure of all inspections and safety reports.

Signatories include two widely known American companies in Abercrombie & Fitch and American Eagle Outfitters Inc., as well as successful Swedish company H&M. But many have not. Popular companies like Gap’s “empire,” Forever 21 and more, have not signed.

Organizations like Green America provide updates on raids and inspections in the factories of companies that have not signed. Gap has been shown to have children as young as 10 working for them. Wages in Bangladesh were lifted from $38 a month to $68 a month for the entire country in 2013, but 40 percent of companies have not followed the law.

Keep in mind that this wage is even less for child workers. According to the International Labor Organization, an estimated 170 million children are engaged in child labor. Unlike in the United States, where workers have unions to protect their rights, poorer countries do not have stable economic and social environments to ensure child and adult workers are fairly represented. Children are deprived of resources, such as adequate pay, health and education. Even though Bangladesh has pledged to end child labor in its country, little to no progress has been made.

The problem with fashion is this: The clothing on your back was probably made by a small child on the floor of a collapsing factory in Bangladesh or India. People, especially in America, need to pay attention to what is happening in the manufacturing of our products. This labor is similar to a modern day form of slavery and we as a nation do not condone slavery, right?

Child labor and unfair treatment of workers ends with the consumer. Writing this column opened my eyes to what the fashion industry hides from us. You don’t see those children workers when you see that sweater or pair of shoes. It is almost impossible to find information on which companies use fair labor, unless you want to do some serious digging. And the companies that do use fair labor create brands that are unheard of and uncommon to the mass consumer.

Because of the complex supply chains, it may seem almost impossible to make a difference. But think about it in a different light. Think about my dad. Banana Republic was one of the only stores where he shopped for years. He spent up to $1,000 a year for about 15 years.

Keep in mind he rarely shops, so many customers spend much more than that annually. The workers at these factories were making $38 or less a month. Child workers were making much less. Think about how much less of a profit a company would make if a thousand people quit their cards or stopped shopping at a certain store. Gap’s “empire” is worth over $6 billion. They can afford to give their workers fair wages.

By boycotting this company, these companies may start to reconsider their unethical practices. The first step toward making progress is knowledge. As someone who is interested in fashion and is pursuing a degree involving human rights, I know that just talking about these issues makes a difference.

I hope my peers at the University of Massachusetts learn to be conscientious consumers. If it says “Made in Bangladesh,” it is extremely likely that the clothing was manufactured in unsafe conditions, by children or by underpaid workers with little to no rights.

If you’re curious about which companies follow these accords and agreements, go to the International Labor Organization’s website and bangladeshaccord.org. If you take away anything from this column, it’s that fast fashion doesn’t truly come cheap.