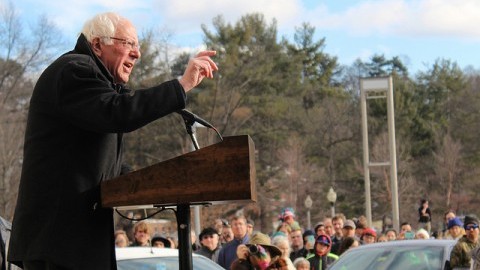 A crowd of more than 3,000 converged on the Fine Arts Center on the University of Massachusetts campus Saturday afternoon in anticipation of the arrival of Democratic presidential candidate and Vermont Sen. Bernie Sanders.

Sanders, who was set to speak inside at 1 p.m., gave two separate speeches as part of his “Future to Believe In” rally in order to accommodate those who could not fit inside the auditorium, which exceeded it’s 1,800-person capacity.

Supporters of all ages lined up long before the doors to the Fine Arts Center opened at noon, extending as far as the North Pleasant Street sidewalk. Others gathered around the podium outside, watched Sanders’ speech on a Jumbotron set up on the concourse and huddled next to portable heaters to combat the frigid, 35 degree weather and heavy wind.

When Sanders stepped up to the podium outside, greeted by tremendous cheering from the crowd, he expressed both gratitude and disbelief at the outpouring of support at the rally.

“Obviously we underestimated the kind of interest we had here in Amherst,” Sanders began.

Yet, the “Future to Believe In” rally was not the first time that a rally was held on campus in support of Sanders. In late October, hundreds of UMass students and faculty gathered together and heard from speakers who supported Sanders’ policies.

On Saturday, Sanders began his speech by emphasizing the need for “a political revolution.”

“What that means,” he said, “is that no president, not Bernie Sanders or anyone else, can transform this country in the way that we need.” Instead, Sanders advocated for a government “that has got to represent all of the people and not just a handful of billionaires” in order for positive change to happen.

Sanders, attempting to give an example of this political revolution, discussed how his campaign is founded on the public’s support, as opposed to financial backing from billionaires.

According the Sanders, the key to his success is that he is “dealing with the real issues facing the American people and the middle class.” For example, he continued adamantly, he is in support of greater income equality and a $15 per hour minimum wage, what he believes to be a living wage for the middle class.

In order to combat the high unemployment rate, particularly for the youth, Sanders said he intends to create millions of decent paying jobs in construction-related fields while “rebuilding our crumbling infrastructure, our roads and our bridges.”

Sanders also emphasized a need to fill the workforce with college-educated individuals. However, he said, making the choice to further one’s education should not require they be placed in crippling debt for years to come.

Many people have questioned how Sanders intends to pay for such changes, he said. His response: “we’re going to impose a tax on Wall Street speculation.” Sanders is a firm believer in increased taxes on billionaires and large corporations.

Other topics that Sanders spoke on include divesting from fossil fuels in order to combat climate change, standing up for the rights of women, gays and lesbians and standing against institutional racism.

After a 20-minute speech outside, Sanders moved into the auditorium for a second speech touching upon the same topics. Carlos Rojas-Álvarez, campaign coordinator for the Student Immigrant Movement, and Patty Healey of National Nurses United (the first union to endorse Sanders), spoke to introduce Sanders and praise his politics.

Priya Ghosh, president of the Coalition to End Rape Culture at UMass, stood outside the Fine Arts Center to hear Sanders’ speech. Ghosh said she wanted to see him speak, due to her interest in electoral politics and having researched Sanders’ viewpoints.

“I think he brought up a lot of important issues,” Ghosh said in review of Sanders’ speech. “I think he could have spent a little more time talking about maternal health care, maternity leave and about women of color…If he could have touched on Black Lives Matter, queer folks, other issues that are facing minorities in this country, I think he would have gotten a lot more carry today.”