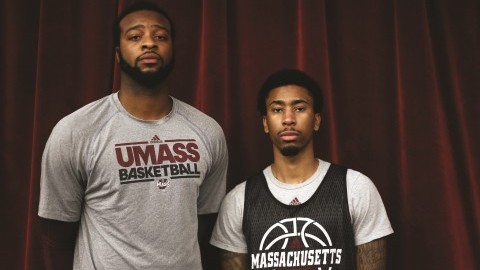 This is exactly how Massachusetts guard Trey Davis and forward Antwan Space wanted to go out. The journey that started back when they were in sixth grade has now set itself up for a storybook ending – one that will end together.

Davis, who’s been at UMass since his freshman season in 2012-13 and had played in all 114 games during his time as a Minuteman, now joins life-long friend Space, who transferred from Texas A&M as a graduate student prior to the start of the 2015-16 season.

However, while the two were reunited in Amherst last spring, they had to wait a little while before they were playing in a meaningful game on the same team again.

Space missed the first 10 games this season with what the University deemed “personal reasons,” “attending to a private matter” that led to his absence throughout the remainder of the fall academic semester.

“We just came up and we’ve just always been together playing on the same AAU team for a long time, and we just became best friends,” Davis said at UMass’ media day before the start of the season. “We’re always together when we’re back at home, it’s just good to have that same type of feeling up here at UMass.”

“I love it. This new facility is great. My teammates are great. We’re all getting along and chemistry is good,” Space said to Masslive.com in the preseason. “The coaching staff is really helping me and I’ve gotten even better just being here. Even though it’s my fifth year, I feel like I’ve gotten better.”

“I think Space coming here, Trey was huge in that because they had a good relationship. Your players recruit other players better than you because they talk to them more. When you have a bunch of guys that enjoy being here, now all of a sudden you have the opportunity to do some nice stuff,” UMass coach Derek Kellogg added.

Making stops along the way

Playing at UMass was never in the initial plans for either Davis or Space, as the two initially set their eyes on playing together at Florida State after Davis had graduated from Woodrow Wilson High School and Space from DeSoto High School.

However, while Space made it to Tallahassee to play for the Seminoles his freshman year, Davis – who was a lower-ranked player coming out of high school – signed with George Washington. After the Colonials fired coach Karl Hobbs before the start of the 2011-12 season, Davis decided to take a prep year at Vermont Academy before enrolling at UMass the following season.

Davis got his feet wet with the Minutemen during the 2012-13 season, appearing in all 32 games as backup point guard. But in Space’s 2011-12 freshman season at Florida State, he suffered a foot injury in the first month of the season that limited him to just 10 appearances.

Space then transferred back home to Texas A&M and was forced to sit out the 2012-13 season per NCAA transfer rules.

In his two seasons with the Aggies, Space played in 55 career games averaging 5.6 points per game and 4 rebounds in 17.9 minutes per game. Despite appearing in 34 games as a redshirt sophomore, 22 of which were starts, Space made just two starts in 21 games played as a junior last season.

“I’ve been talking to Antwan since he was at (Texas) A&M. I’ve been telling him, “Man, I want to bring you here for our senior year and go out together.’ After his second year, we just kept talking to each other throughout the season, and I was like, ‘Hey bro, you need to come up here for a visit,’” Davis said.

He added: “He took that visit and once I knew it was coming to take that visit, I knew he was going to come here.”

When reporters asked Space before the season why he chose UMass, Davis wasn’t the only reason behind his decision to join the Minutemen.

“A combination of reasons. Coach (Derek) Kellogg’s a great coach and coach Shy (Chatman) is a great coach. Trey Davis, of course, is one of my best friends,” Space said. “The history, honestly, I was a big fan of Chaz Williams. I used to watch him a lot. I just wanted new scenery. It’s a tough conference and I’m ready for the challenge.”

In addition to his comfort level with the UMass coaches and current Minutemen players, Space’s personal reasons to transfer to UMass were also backed with his role on the basketball court and in Kellogg’s rotation.

“Now he has the responsibility of being needed and not just as a guy on the team. When you’re somebody that we need to perform, you have to come every day,” Kellogg said. “He can really score the ball, he’s talented offensively. When he really locks in and gets prepared mentally, he’s got a chance to be a really good player.”

After losing starting center Cady Lalanne – who was selected by the San Antonio Spurs with the 55th overall pick in the 2015 NBA Draft – and forward Maxie Esho, the Minutemen were in need of frontcourt depth entering the season. Lalanne (11.6 points per game) and Esho (11.3) were UMass’ leading scorers last season as well as their top rebounders.

Prior to the start of the season, the Minutemen had only three returning forwards/centers returning in Tyler Bergantino, Seth Berger and Coleman. Out of the trio, only Berger had any starting experience, starting eight games in 2014-15 before missing the remainder of the season with a stress fracture in his foot.

Of the three, Coleman was the leader with 329 minutes played last season, while Bergantino added 291 and Berger was limited to 149 due to his injury.

In addition to Bergantino, Berger and Coleman, UMass added freshmen centers Malik Hines and Rashaan Holloway, who were both in Amherst last year as non-qualifiers. Holloway started the first 14 games this year, but due to foul trouble and lack of stamina concerns, he has been limited to 197 minutes played while Hines has logged 158 minutes.

Since Space’s return, Hines has seen his minutes decrease from 9.9 minutes per game to eight over the seven-game stretch while Holloway’s have dropped from 12.3 to 6.6. Space has played 181 total minutes (25.9 per game) since returning to the Minutemen.

“He brings maturity which is the biggest thing we lack in the frontcourt. You lose two fifth-year seniors in Cady and Maxie and you bring in two freshmen, while I think they’re going to be good, it may take them some time. Space brings just a mature older guy who’s been around the block,” Kellogg said before the season.

Much like Berger and Coleman, Space has the ability to move around to multiple positions on the court, allowing Kellogg to use UMass’ versatility with a combination of different lineups. Space said he felt confident playing anywhere as long as he was playing meaningful minutes and contributing to the cause.

“(Power forward), (center), or (small forward). Whatever or wherever I can fit in,” Space said. “I’m not really worried about what position they have me in as long as I’m on the court and can contribute.”

Space made his return to the lineup Dec. 21 in a 90-66 loss against then-No. 10 Providence finishing with 11 points and nine rebounds in his debut. Since then, Space has appeared in all seven of UMass’ games, averaging 8.6 points and 6.1 rebounds per game while his seven blocks rank third on the Minutemen.

While UMass currently rides a four-game losing streak, Space will be a key contributor in Kellogg’s rotation and will be relied upon heavily throughout the remainder of the regular season and into the Atlantic 10 tournament.