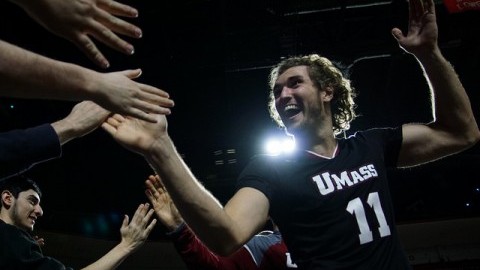 Coming off a 30-point blowout loss to then-No. 25 Dayton on Jan. 6, Massachusetts men’s basketball coach Derek Kellogg decided to make a change to his starting lineup.

The announcement presented a new opportunity for Bergantino, who spent all 95 of his previous games coming off the bench for UMass (8-9, 1-4 Atlantic 10) over four years.

“We were on the bus and (Kellogg) was like, ‘You know what, I’ve made my decision and Tyler’s going to start,’” Bergantino said before Wednesday’s practice. “It was like, if you’ve ever seen a dog and his ears popped up. That’s how I felt. It was really nice to have that spot.”

Bergantino responded with a career-high 13 points along with five rebounds in 29 minutes, as he served as one of a few bright spots in the Minutemen’s 88-77 loss to the Bonnies.

In three games since the switch, Bergantino is averaging seven points and four rebounds in just under 20 minutes per game. According to the 6-foot-9 Springhill, Florida native, a chance to start has been something he’s strived for since arriving at UMass.

“It’s something I’ve always been waiting for and now that it’s here I’m really trying to make sure I make the most of it,” he said. “I want to bring what I can to the table and play my role.”

Bergantino spent his first three seasons sitting on the bench in favor of 2015 San Antonio Spurs draft pick Cady Lalanne. He entered this year with a shin injury that kept him out of the Minutemen’s first three games.

Bergantino said one of his biggest focuses in his new role is to come into games with immediate energy to try to get UMass out to a fast start.

“When I score it’s normally really quick or when I’m trying to do something good right out of the gate. I just have to try to set momentum for not only myself but for the team,” Bergantino said. “I have to try to get the most out of my minutes what I can.”

This energy is something Kellogg noted when explaining the decision to insert Bergantino into the starting lineup. He added that Bergantino’s experience and defensive positioning makes him a better option than Holloway and freshman Malik Hines at the moment as the latter two continue to develop.

“I thought we were getting off to starts that I wasn’t super happy about and he was showing some good energy in practice,” Kellogg said. “Quite honestly, he knows where to be a little bit better than the younger guys who are still figuring out where you’re supposed to be on the court.

“Now if we can get him to establish post position on offense and finish a couple more plays around the rim, he’ll definitely be doing everything I think he’s capable of doing,” he added.

Starting senior guard Trey Davis injured his ankle against St. Bonaventure after awkwardly landing on the foot of a defender on Jan. 9 and despite returning later that game and playing in the following two games, it’s still a minor issue, according to Davis.

Davis said Wednesday that the situation has progressed from the game against the Bonnies to Saturday’s most recent matchup in Davidson. He added that with a couple more days of treatment, he’ll be fine for this Saturday’s game against Saint Louis.

While Davis hasn’t missed time due to the injury, he acknowledged the challenge of playing at full speed in games while he continues to recover.

“I just have to be smarter,” Davis said. “Attacking off transition is kind of hard for me and that first step is kind of slower but I just have to work with it and continue trying to do it anyway.”

As for forward Zach Coleman, who returned to action for two minutes in last weekend’s loss to the Wildcats after missing the previous five games with a knee injury, Kellogg said his status for Saturday’s game is day-to-day.

Coleman is averaging 5.8 points and 5.8 rebounds in 12 games (11 starts) and was described by Kellogg as one of the Minutemen’s most consistent players.

“I thought for a while he was one of our better players and did a lot of stuff that is important in trying to win in basketball,” Kellogg said. “Unfortunately, he wasn’t able to do that for a while and I think that had an effect on us. If he’s healthy, he’s good enough to help us.”

Kellogg said Coleman practiced both Tuesday and Wednesday on a limited basis.