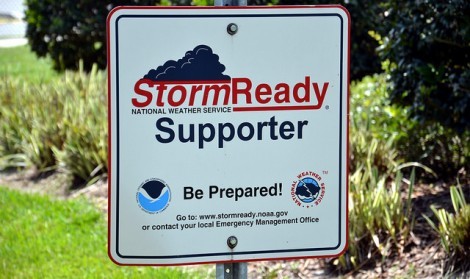 After reviewing the emergency preparedness programs being utilized at the University of Massachusetts, the National Weather Service has given it a “StormReady” designation, the first to be awarded to a public university in Massachusetts.

According to a UMass press release, there are several core requirements that a university must meet in order to earn a StormReady designation, which is valid for three years.

The press release states that “a university must establish a 24-hour warning point and emergency operations center; have multiple ways to receive severe weather warnings and forecasts and to alert the public; create a system that monitors weather conditions locally; promote the importance of public readiness through seminars; and develop a formal hazardous weather plan, which includes training severe weather spotters and holding emergency exercises.”

Jeff Hescock, director of University Emergency Management and Business Continuity, said he and his colleagues began the application process about a year ago. The initial application included detailing the University’s plans and procedures for monitoring and responding to severe weather. Hescock said it took a couple of months to gather all of the necessary information.

“It’s a great opportunity to kind of get a full understanding of how their office operates on a day-to-day basis,” Hescock said of the Taunton trip. “What they’re doing is showing you from beginning to end how they monitor the weather, then how they do forecasts, then if it’s going to be a significant storm, how they schedule conference calls.”

The third step in the StormReady designation process was to schedule an on-site assessment, which took place Jan. 7 at UMass.

Hescock explained that local, state, federal and National Weather Service officials met with various authorities that are involved in emergency preparedness, including representatives from the Office of Emergency Management, Environmental Health and Safety, UMass Police Department and the electrical and computer engineering department.

The officials were also shown the University’s outdoor warning sirens, the primary Emergency Operations Center and the radar system and remote sensing lab operated through the Collaborative Adaptive Sensing of the Atmosphere (CASA) program.

Brenda Philips, co-director of the CASA program, said in a phone interview that the program – which is led by the electrical and computer engineering department – allows her and her colleagues to provide reports to the University’s Emergency Management staff that they can use to plan events on campus.

By showing when a storm will strike the immediate area, Philips said that CASA increases the campus’ safety.

“When you have things like commencement, we’ll make sure that the radar is running and providing coverage around the campus,” added Apoorva Bajaj, CASA’s innovation manager, in a phone interview. “If any severe weather is coming, we’ll be able to relay that information to Emergency Management right away so the University can make decisions about the commencement.”

According to the press release, UMass was commended during the on-site assessment for its emergency preparedness program, 24-hour warning point capabilities, the CASA program, and its “ease of transition from severe weather events to all-hazards planning.”

Robert Thompson, meteorologist-in-charge of the National Weather Service office in Taunton, will present UMass officials with the StormReady designation in a formal recognition ceremony.

Although the date has yet to be decided, Hescock expects the ceremony to occur within the next two months.

UMass is the fifth university in the state to be named StormReady, joining Harvard University, Boston College, Boston University and Tufts University. The designation has also been given to 14 communities, one military site and one commercial enterprise in Massachusetts, according to the press release.

Hescock emphasized that the StormReady designation would not be possible without the work of numerous campus departments, who actively get information about severe weather emergencies out to the campus community.

“It’s a collaborative approach with Environmental Health and Safety, UMass Police Department, (Residential) Life, Students Affairs – I could go on and on,” Hescock said. “To get the preparedness information out there is one of the big keys to this StormReady recognition.”