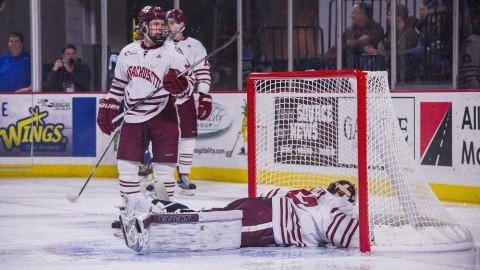 Things were supposed to be different this weekend.

This was supposed to be the weekend when things got back on track for the Massachusetts hockey team.

UMass is now in sole possession of last place in the conference with eight points with only five hockey east games remaining.

Heading into the third period down 3-2, the Minutemen was given a major opportunity to knot the game at three when they were rewarded a power play a mere 19 seconds into the period.

But it was Maine forward Blaine Byron who found the back of the net on a shorthanded effort to extend the lead to 4-2.

UMass coach John Micheletto noted the ability by his team to cut the lead to one not once, but twice, but ultimately knew it wasn’t good enough.

“It was big, ” Micheletto said recalling the Black Bears’ fourth goal. “As you’re narrowing the lead and we’ve been taking the action to them for the previous period and a half, obviously we can’t fall asleep even for a second to give them an opportunity there. They took advantage as teams are apt to do.”

One night after scoring two goals with the man advantage, the Minutemen went 0-5 on their power play opportunities, stringing together five shots in 10 minutes of time while being on the one-man advantage.

When asked what the difference was on special teams tonight, there was a 15 second pause before Micheletto could answer.

“No real difference in what they were doing,” Micheletto said. “Yesterday we moved pucks with a little bit better purpose and allowed us to then take advantage of seams and miscommunications to adjust.”

Micheletto later used the word “stagnant” to describe his team’s effort on the power play on Saturday.

“I think we did have some opportunities and just weren’t able to capitalize on them,” he added. “That’s the way the power play goes, 12 shots one night, you get five the next. It helped us last night and bit us in the rear end tonight.”

Maine extended its lead to 5-3 with 4:15 when Maine’s Nolan Vesey scored on a power play after Patrick Lee was called for hooking.

Ivan Chukarov scored with 33 seconds remaining to cut the deficit to 5-4, however couldn’t rally to score the game-tying goal.

However one of the major turning points in the game came in the second period when a Steven Iacobellis goal appeared to cut the lead to 3-2, but was waved off due to goaltender interference.

“There was incidental contact between one of our players and the goaltender off of the first shot which prevented him from playing in his position on the second shot,” Micheletto said when asked what the explanation was given to him by the referees. “The unfortunate thing is I don’t think it would’ve mattered, contact or no contact, but that’s the rules.”

He added: “I’ll be ok if we kick the plug out of the instant replay machine moving forward at this place. It has not been kind to us over the course of the last handful of games.”

At the other end of the spectrum, this was a highlight weekend for Maine, which picked up its first two road wins of the season to climb out of last place in the conference.

“I think it means a lot,” Black Bears coach Red Gendron said. “We’ve had a lot of games this year where we played well enough to win on the road and at home, and didn’t score or took too many penalties at the wrong time.”

For Iacobellis and the rest of UMass, the message remains the same: keep positive.

“Obviously that’s what everybody says, but it’s true and people say it for a reason, because it’s what you have to do,” Iacobellis said. “We had a lot of belief tonight and we just didn’t end up getting the result that we wanted, but as long as we keep doing the little things right, we’re going to bounce out of it for sure.”