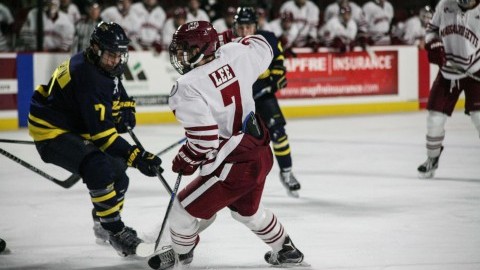 Last time out against No. 12 Yale, the Massachusetts hockey team was blown out by the Bulldogs 6-1 in the championship game of the Capital City Classic on Oct. 31.

After battling back from two goals down in the third period to send the game into overtime, it looked as though UMass was closing in on a tie against the Bulldogs as time continued to tick in the extra frame. But Yale forward John Hayden beat Minutemen goaltender Alex Wakaluk for his second tally of the night with one minute, 47 seconds left in overtime to snatch the 3-2 victory.

“I thought we battled hard, kept ourselves in the game against a very good team and willed ourselves into tying it up in the third with some great effort and execution,” UMass coach John Micheletto said.

“Obviously a penalty in overtime is tough to navigate, especially with a long change, and that’s what bit us in the backside tonight. A lot of positives with a depleted lineup, but at the end of the day we’ve got to learn to win that game and not take the penalty and give away the (win).”

Heading into the final 20 minutes trailing by two, sophomore Patrick Lee got the Minutemen comeback started, tallying a goal on the man advantage to cut the Bulldogs’ lead in half just two and a half minutes into the period.

With a little over four minutes left, Dominic Trento then equalized the score, putting one home on assists from freshmen Kurt Keats and Austin Plevy.

Despite not having several key defenders such as Marc Hetnik (injury) and William Lagesson (Juniors) in the lineup, Micheletto thought his defense, especially Wakaluk, did much better than last time out against Yale.

“Our puck possession was better, it limited their transition opportunities. There were definitely some ‘grade-A’s’ that Alex (Wakaluk) made some great saves on, and the glorious odd man rush opportunities weren’t there tonight,” he said. “Frankly, our goaltending performance was good tonight, and that made a difference.”

Micheletto also recognized the fact that almost half of the Bulldogs’ offense comes with the man advantage and lamented the one extra penalty in overtime as a difference maker.

“We were hoping to limit them on the power play since 40 percent of their offense has come on the power play so far this year, but we took one too many penalties and had done a good job against a very potent power play up until that point,” he said. “Going from three kills to four kills is too many to give a good team.”

A bright spot in Tuesday’s defeat was the performance of Wakaluk, who made his second straight start in goal and made a career-high 35 saves in the loss.

“It’s been great to see him get rewarded for his diligence and hard work,” Micheletto said. “Having been such a good teammate through what I’m sure has not been easy times at some time, he’s stuck through it and become a better goaltender and regained the confidence.

“I think these last two games, it’s nice to see him get some reward for all of that.”

Overall, the result was a disappointing one for Micheletto, but he recognized the fight in his team and determination to get back into the contest.

“Down our leading scorer (Dennis Kravchenko) as well, cutting that deficit I think showed a lot of grit and determination,” Micheletto said. “We played on the inside in the third much more effectively than we had through the first 40. That goal was a result of that commitment to getting on the inside with pucks and bodies, so I think there are some positives we can take out of it.”

UMass will be back in action Saturday night when it heads to Agganis Arena to take on conference opponent No. 11 Boston University.