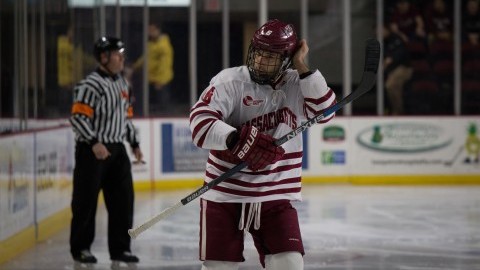 Five goals in any hockey game is a recipe for success.

Against the Massachusetts hockey team, No. 4 Boston College accomplished this feat in the first period.

It didn’t take long for the Eagles to get on the board, when defenseman Ian McCoshen found the back of the net less than five minutes into the contest to give BC the early lead. Four more goals from Alex Tuch, Chris Calnan, Colin White and Miles Wood extended the lead for the Eagles, putting the game out of reach for UMass (7-13-1, 2-8-4 HEA) after just 20 minutes of play.

“I’d like to congratulate coach (Jerry) York on an unbelievable achievement,” Minutemen coach John Micheletto said after the game. “Obviously years of doing what he’s done at different schools and the consistency of that sort of excellence is really something.”

“It pretty much resulted in a lot of goals off of bad turnovers in the first period, and at that point you have to lay in the bed that you made,” Micheletto added.

A common theme this year, UMass was behind the 8-ball from the opening faceoff, and never seemed like it would make the game a close one.

“When they start going in the back of the net it makes it harder and harder,” Micheletto said regarding the opening period. “I actually thought that in between the turnovers there were some decent plays being made. I thought we just started squeezing a little too tightly and weren’t touching pucks to keep the chain moving in the early going.

“When that started happening we gave up some uncharacteristically bad turnovers right in front of our own goalie. We’re in a bad stretch here, and we’ve got to identify that and push through it at this point,” Micheletto said.

The Eagles scored three goals in the second period, and were held scoreless in the final 20 minutes.

One of the major differences in the Minutemen’s latest defeat was the play of their special teams unit. Despite earning four power plays on the night, UMass allowed two shorthanded goals, including a power play goal on one of BC’s two-man advantages.

Micheletto pointed to the turnovers as a reason for the lack of success, as well as giving up odd-man rushes while playing a man up. Wood and Austin Cangelosi tallied shorthanded goals, with captain Teddy Doherty adding a goal on the power play.

Captain Steve Iacobellis, who finished with just two shots on the night, recognized the necessity to put this loss behind them, and focus on the next game.

“I think every loss, no matter how it unfolds, always hurts, whether it’s a nail biter or worse than that,” Iacobellis said. “I think we always come into practice ready for a new week and looking for a new opponent and starting fresh. Unfortunately right now we’re on a low stretch, but tomorrow we’ve made it a point to come in and not let this one affect us.”

Micheletto had similar thoughts, acknowledged the importance of getting through these tough times as a group.

“Sometimes whether it’s in hockey, school or life, things aren’t going your way, and I just wanted to let them know that we’re there for them, and that as bleak as it sometimes feels, especially for young people, I wanted to remind them that they’re good people and good hockey players and that we were going to get through this together,” Micheletto said.

The Minutemen will not have time to dwell on their misfortunes, as they are back in action tomorrow night at home against Vermont. Puck drop is set for 7 p.m.