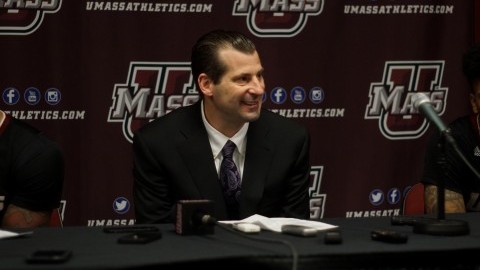 The Massachusetts men’s basketball team likely put the finishing touches on its 2016 recruiting class Monday, adding another highly-rated recruit to the mix.

Flowers brings size as a 6-foot-8 forward and is averaging 19 points per game for Sacred Heart this season. He was rated as a three-star recruit by ESPN and is listed as the third-best recruit coming out of Connecticut by the site.

Flowers is considered a “late bloomer” in terms of potential and has grown four inches in the past year. He was named one of the most improved New England basketball recruits by New England Recruiting Report this past summer.

In Finkelstein’s thread of tweets revealing Flowers’ commitment, he said Flowers stated UMass’ new Champions Center facility, the chemistry among players and his relationship with coach Derek Kellogg were major factors in his decision.

According to Finkelstein, Flowers was also considering Providence and Maryland.