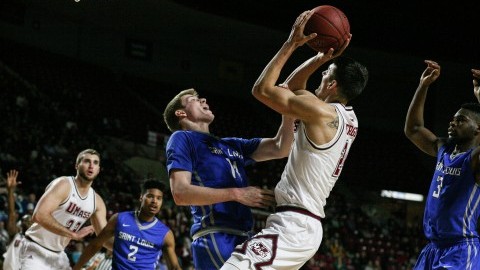 Prior to the start of the Massachusetts men’s basketball team’s game against Saint Joseph’s Wednesday, UMass coach Derek Kellogg made some adjustments to the starting lineup to shake things up and potentially end a five-game losing streak.

Seth Berger received the message, but the rest of the Minutemen (8-11, 1-6 Atlantic 10) didn’t as they dropped their sixth straight, falling to the Hawks 78-70 at Hagan Arena.

Berger scored a career-high 17 points, 13 of which came in the second half, in addition to grabbing six rebounds, with a pair of steals and an assist.

“I thought our squad fought and battled today and looked like a UMass team that’s trying to get out of a rough patch,” Minutemen coach Derek Kellogg told the Daily Hampshire Gazette after the game.

“The guys battled to the end. A few plays here or there and I thought we could have turned the tide and come out with a victory,” Kellogg added.

Kellogg removed Berger, who started the past seven games for UMass, and guard Jabarie Hinds – who started at point guard every game up until Wednesday – from the starting rotation in favor of Antwan Space and C.J. Anderson. Anderson finished with two points and grabbed team-leading seven rebounds while Spaced finished with five points and six rebounds.

The Minutemen came within five points of the Hawks with 45 seconds remaining in the game when Hinds (13 points) made a layup – his 1,000th career point between his time at West Virginia and UMass – to make it 75-70. But Isaiah Miles made three of his nine free throws in the final minute to secure the win for the Hawks.

“We made some strides, we’re playing hard and making plays, but we’re not happy with the result,” Berger said. “We have work to do. We’re not going to be satisfied until we win.”

Miles led St. Joe’s with 27 points (8-of-14 field goal shooting) and 12 rebounds whiles DeAndre’ Bembry added 13 points and nine rebounds despite shooting a dismal 3-of-13 from the field, including two missed 3-pointers.

After scoring 36 and 30 points in his past two games, UMass guard Trey Davis finished with 10 points on 4-of-12 shooting. Davis, who entered Wednesday leading the Minutemen with 33.4 minutes played per game, was restricted to just 25 minutes after picking up two fouls in the first half.

UMass cut its deficit to as low as four after Hinds drilled a 3-pointer with 8:07 remaining in the game, but it failed to score over the next 2:40 as Saint Joe’s lead extended its lead to 12 with 3:49 to go.

After dealing with a knee injury that has forced him to miss significant playing time over the past month, Zach Coleman scored 10 points in 26 minutes played.

“You have to create your own fortune and destiny our there. We’re trying. We’re going to keep at it and keep getting better,” Kellogg said.

“This is something we can build off of. Let’s move forward and try to get some wins now,” he added.