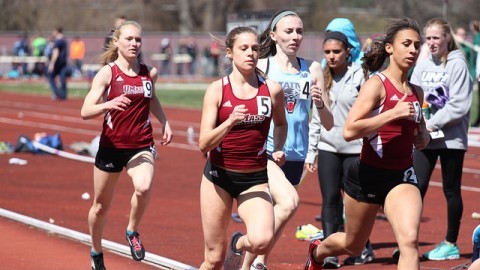 The Massachusetts men’s and women’s track and field teams competed in the Beantown Challenge this past weekend and both saw standout performances that amounted to a first place finish for the Minutemen and second place for the Minutewomen.

While the field of competitors included top local programs like Boston College, Brown, Stonehill, and Harvard, most of them were not competing at full strength or in their primary events.

Both UMass coaches also moved their athletes to secondary events as well, but that did not diminish the confidence gained from Saturday.

“Now with two meets under our belts I’ve been pleasantly surprised by the performances so far, they’ve really been performing at a high level this season,” coach Julie LaFreniere said.

On the track, the Minutewomen were led by strong performances from sophomore Colleen Sands and senior Carly Zinner. Sands ran a personal best 9:58.33 in the 3,000-meter run earning second and Zinner finished with a time of 4:57 to also set personal best in the mile and earned second place.

“For (Colleen) Sands, it’s like someone flipped the switch with her, she started out strong and just kept getting faster,” LaFreniere said. “And (Carly) Zinner looked fantastic, she has really been competing at a high level for this early in the season”.

UMass also benefited in the field events, specifically in throwing. Kelsey Crawford, listed as a redshirt senior, led the way for the Minutewomen in the shot put event with a mark of 43 feet, five inches.

In the women’s weight throw, four UMass throwers placed within six feet of each other. Junior Margret Riseborough took second with a personal best throw of 50 feet, seven inches. Crawford followed her with a throw of 47 feet in third, senior Sara Wagner in fourth at 46 feet, three inches, and senior Alexa Pearing in fifth at 44 feet, 11 inches.

The 800-meter run was mainly a showdown between the Minutewomen and Boston College.  Junior Heather Maclean, with a time of 2:10, led freshman teammates Emile Cowan and Mary Lavery – both 2:14 – to a sweep of BC in the event.

“With Ryan Thomas coaching BC as a former UMass all-American, it makes for a fun and friendly rivalry, it was one of our secondary goals to sweep them,” LaFreniere said. “It’s fun to see our athletes right there competing with top athletes”.

Many of the times and marks set for UMass currently ranks near the top throughout the conference and there is still room for the athletes on the team to improve.

The men’s side for UMass finished first in large part due to a balanced effort between both newcomers and returning athletes.

The Minutemen were the beneficiary of multiple first and second place finishes that started with the 60-meter dash. Freshman Jonathan Derolus won the event with a time of 6.92 seconds.

In the 800-meter run sophomore Russell Wells finished first with a time of 1:56.    Fellow sophomore John Chuma took second place in the pole vault with a height of 15 feet, nine inches.

In the 3,000-meter run, graduate student Kevin Rooke and junior Cory Thomas took second and third place with the respective times of 8:34 and 8:36.

“We have a really nice package coming into the season with a lot of returners and freshmen with talent,” O’Brien said. “The team has a lot of depth and versatility”.

Junior Deion Arnaud showed his versatility by scoring points in both the long jump, finishing fourth with a mark of 21 feet, 11 inches, and sixth in the 400 meter run with a time of 51.72 seconds.

The depth and versatility could pay dividends for the team later in the season when the championships start.

“This meet was pretty convincing for our team, even with most of our athletes in secondary events. This season will probably be one of the best this program has seen in the past few years,” O’Brien said.

Both the UMass men and women’s teams will be competing Friday afternoon at the Joe Donahue Indoor Games in Roxbury.