Why I’m not voting for Bernie Sanders 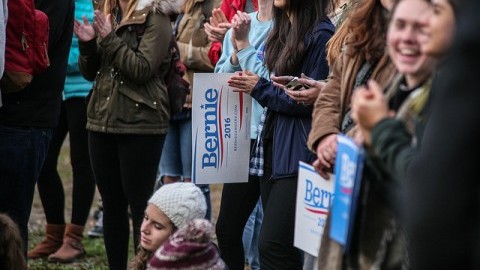 As a college student, I have a confession to make.

I will not be voting for Bernie Sanders. I don’t struggle from socialist paranoia nor am I disheartened by his passion for income inequality; in fact, I agree with Sanders on many issues.

But I’m not voting for him because I want my vote to matter.

Sanders’ popularity reminds a lot of people about the attention Ralph Nader received during the 2000 election. These days, most people don’t know who Nader is, let alone his policies. A lot of Sanders’ appeal comes from the millennial and younger generations. Many colleges have Bernie Sanders clubs. The candidate even held a rally here at the University of Massachusetts earlier this year.

But what surprised me is how many people have bought in to how unrealistic his candidacy is. This is not surprising in other situations. When President Barack Obama makes the Kool-Aid, we expect MSNBC to drink it. But on Facebook, many of my friends talked about how impassioned and dedicated they are to Sanders as a candidate. They speak of how they are ready for a revolution and how they are so humbled and blessed to be part of one.

\One of the reasons why students flock to Sanders has to do with the reforms he wants to make to college education. Eliminating student debt and bringing down the cost of tuition are policies that affect many of my friends along with the vast majority of UMass students.

But when you talk to students and ask them why this is necessary or what proposals they would support in lieu of the current plan in place, they draw a blank. If anyone told them that the Pell Grant system should be eliminated (an example of too much government power) students would laugh at you – or worse – get angry, arguing that it is their ticket to college. People don’t understand that Pell Grants are one of the reasons why universities can charge so much for tuition in the first place.

But let’s get back to this so called “revolution.” Apparently it would be a revolution of the people that were most affected by the 2008 recession. It would include paid sick leave, along with an increase in the minimum wage, which Hillary Clinton supports. But people need to understand how government policy works before they say they support something so unrealistic.

I am well aware of what my critics will say to me. It seems as if I am arguing that we shouldn’t try focusing on changing the system because it is too hard and therefore a waste of our time. This is hardly my point. My point is that these reforms will never come if we have a uniformed, out-of-touch electorate. It’s an electorate where taking a selfie or a Snapchat with Sanders matters more than going door-to-door on the issues. I can probably assume that less than one percent of the people that attended the Sanders rally at UMass have ever gone door-to-door for his cause. I hope I’m wrong.

Bernie Sanders has mainly focused on one issue: income inequality is the center piece of his campaign. One of the many problems with Sanders is that instead of focusing on wealth creation, he has become obsessed with wealth distribution. Progressives like Sanders tout the success of countries like Sweden and argue that their semi-socialists economies with bigger government spending and more expansive federal programs are the keys to their success. What liberals fail to understand is that socialism is not an economic theory and that Sweden has moved beyond this Nordic socialism that Sanders loves.

However, socialism is not a deal breaker for me, nor has it been an issue for most of Sanders’ supporters. Popularity and viability aside, his stance on guns seems morally backward. He voted against the Brady bill four times and opposed stricter background checks. For me, this is a requisite considering this country’s epidemic of gun violence that ends the lives of 90 Americans every day.

All of this said, there is still some irony involved. The people who are passionate about Sanders’ candidacy are the very ones who say they support him because they want their vote to mean something. I continue to be baffled as to why.

Debbie Wasserman Shultz, chairman of the Democratic National Committee, has made it very clear why Democrats everywhere need to back Hillary Clinton. There are only four scheduled Democratic debates compared with the Republicans’ 10. The amount of air time Sanders receives on a weekly basis is nothing compared to what Clinton receives, hardly making this a fair fight.

The media has all the power here. Minority voters who are less familiar with Sanders as a politician have a very hard time understanding him if the media spotlight is always cast on Clinton. Perhaps this is the reason why the gap between Clinton and Sanders persists.

Sanders is miles behind Clinton when it comes to Democratic minorities, trailing her by over 50 percentage points. If the Republican field is any indication, no one is moved by Sanders’ rhetoric.

There is a reason why they focus their attacks on Clinton. Few people on the right take Sanders seriously. There will be no revolution. If anything, Sanders can use the little influence he has to move Clinton further to the left, challenging her on certain policies. But assuming she goes unfazed, we should wake up and start smelling the coffee that Clinton is brewing for November.