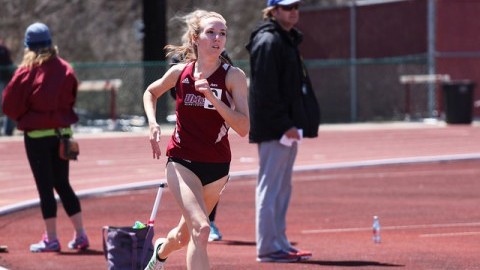 Coming off the Geigengack Invitational at Yale, a select group athletes from the Massachusetts men’s and women’s track and field teams gave some stellar performances at the David Hemery Valentine Invitational Meet in Boston this weekend.

The Invitational took place over the course of Friday and Saturday, Feb. 12 and 13.

The Minutewomen saw some terrific performances in the 4×400 meter and one mile run.

In the 4×400, Elizabeth Gulino, Olivia Weir, Melissa Beaupre and Emilie Cowan broke a program record that had lasted for 30 years. Their time of 3:48.62 was the fastest for a UMass women’s team since 1986, and it earned them a sixth place finish out of 53 teams.

Junior Heather MacLean came through with another strong performance in the mile run. Having toppled a 22-year old program record a few weeks before at the John Thomas Terrier Indoor Classic, MacLean managed to one-up herself with a time of 4:37.80. The time is a career best and puts MacLean in the top 15 nationally for the mile.

It’s only the latest milestone in what has been an excellent season for MacLean. The junior was already named UMass Student Athlete of the week on Feb. 2, and may be due for another accolade after her performance over the weekend.

The Minutewomen compete again on Saturday at the Atlantic 10 Championship in Kingston, Rhode Island.

The Minutemen also sent a relay team and individual runner to the Invitational meet. Cory Thomas, Andrew Hanwell, Michael McNaughton and Benjamin Groleau turned in a time of 9:56.88 in the men’s medley, good enough for fifth place out of 20 teams.

The medley is a relay consisting of one 1200 meter leg, 400 meter leg, 800 meter leg and a 1600 meter leg to finish off the race. With their performance, the foursome qualified for the IC4A Championship in Princeton, New Jersey this May.

Kevin Rooke put up a good performance in the 5000 meter race with a time of 14:43.72. He finished 18th out of over 90 runners, but was just shy of qualifying for the IC4A Championship.

The meet is named in honor of David Hemery, a former Boston University athlete known best for winning the 400 meter hurdles at Mexico City’s 1968 Olympics. Hemery, who is from Cirencester, Gloucestershire, competed for the United Kingdom and has since been honored as a Commander of the Order of the British Empire, as the first President of UK Athletics, and as a member of the BU Hall of Fame, where he was named an All-American twice.

The Minutemen will also be competing in the Atlantic 10 Championship meet this weekend.

Peadar Angelone can be reached at [email protected]