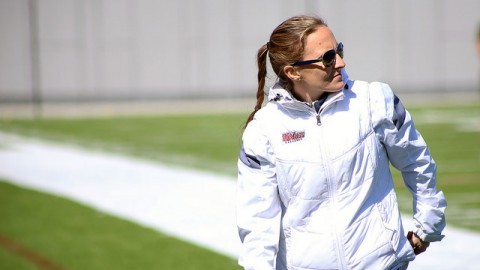 For the Massachusetts women’s lacrosse team, winning has become more than a goal; it is simply a way of life.

UMass (1-0)  has not lost an Atlantic 10 game over its past six seasons, and it stands at 92-12 (.885) overall under Minutewomen coach Angela McMahon, who became the program’s all-time winningest coach after they beat Holy Cross 16-5 in last Friday’s season opener.

Expectations show no sign of slowing down as the other coaches in the A-10 conference picked UMass to win its eighth straight conference championship this preseason.

McMahon credits the success of the program to the players and coaches working around her.

“I think it’s just a testament to all of the players we’ve had all the years I’ve been here,” said McMahon after her record-setting victory against the Crusaders. “We’ve got players that have so much pride and amazing assistants that have just worked so hard to make our team what it is right now. The credit all goes to them.”

There has been no shortage of talent for the Minutewomen over the past several years, with the most recent standouts being Katie Ferris, who is the program’s all-time leader in points (330), goals (211) and assists (119), and Sam Rush, who is second  all-time in goals (176) only to Ferris. Both attackers graduated from UMass in 2014 after playing four seasons under McMahon.

But the current crop of Minutewomen also stack up to their predecessors. Senior attacker Erika Eipp, who transferred from Louisville after her freshman season in 2013, led the team in scoring last year, tallying 45 goals and 30 assists en route to taking home A-10 Offensive Player of the Year honors. Midfielder Hannah Murphy, entering her junior year, was named A-10 Midfielder of the Year in what was a breakout season for her in 2015. Both were named first-team all-conference.

On the back line, senior twins Anne and Kate Farnham lead one of Division I women’s lacrosse’s most aggressive defenses, as UMass ranked second in the country last year after allowing 6.1 goals against per game.

“Our upperclassmen have worked so hard, and now they have a great legacy to leave as one of the best classes we’ve ever had,” McMahon said. “We have players that work hard year in and year out.”

Good players are dependent on good coaching, and the Minutewomen have benefited from some of the nation’s best coaches over the past few years. McMahon has been named A-10 coach of the year four of the past five seasons, while some of her assistants have gone on to become head coaching jobs elsewhere. Most recently, Amanda Belichick (UMass assistant in 2010) – daughter of New England Patriots coach Bill Belichick – is in her first season at the helm of Holy Cross. Ferris is currently an assistant under Belichick for the Crusaders as well.

Current assistant coach Brianne LoManto is entering her fourth season as an assistant with the Minutewomen and was the goalie on three of Northwestern championship teams. She helped develop goalkeeper Rachel Vallarelli, who finished 2015 as one of the nation’s best goalies finishing first in save percentage (.523) and second in goals against average (5.77). Vallarelli is now a volunteer assistant coach at Wagner after graduating last year.

The Minutewomen currently ride a 48-game winning steak against conference opponents, and are far and away considered the best team in the A-10 year after year. McMahon has only lost 12 games in her UMass career, none of which have been to conference foes. The Minutewomen have the second-best best winning percentages over the past five seasons (.885) of all Division I teams, trailing only No. 1 Maryland.

Their greatness stems from a focus on all phases of the game; players at every position are expected to step up when needed each year, and their ability to do so is one of the reasons the program has been so successful.

Ferris, Rush, Eipp and 2011 graduate Jackie Lyons (226 career points), will be remembered as the standout attackers from this generation at UMass, while midfielders Murphy and Kelsey McGovern (2011-14) possess some of the best career draw control averages in school history. Vallarelli (2012-15) is third on the program’s all time goals against average, and has the second most wins with 48, second only to her predecessor, Katie Florence (2009-2012), who finished her career with 55.

Although the Minutewomen have fallen short of expectations in NCAA tournament play in recent years – they bowed out in the second round of last year’s tournament against the Terrapins – and have some question marks at goalie after Vallarelli’s departure, they are expected to once again clinch an A-10 title and qualify for postseason play with ease.