Annual conference for sports management majors to be held Saturday 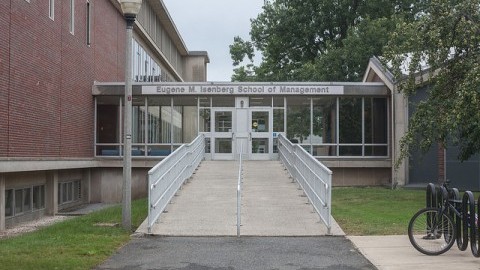 The McCormack Future Industry Leaders Conference, an annual event held for University of Massachusetts students interested in the field of sport management, will be held Saturday in the Isenberg School of Management from 8 a.m. to 5 p.m.

Hosted by the Mark H. McCormack Student Leaders Club at UMass, the conference will feature employers and groups from within the industry and offer students opportunities for networking and professional development.

“It offers them an opportunity to bridge the gap between what they’re learning in the classroom and what they actually need in the field,” said sophomore sport management major Nicholas Kaminski, who helped organize the event.

The conference will also feature a panel and case study of the sport management industry, with speakers who work as both agents and executives in the industry speaking at the event.

Organizations and companies who will be featured at the event include Major League Soccer’s New England Revolution and Fenway Sports Management.

“It’s kind of a once in a lifetime opportunity, being able to connect with people working in the industry,” said Anthony Nahill, a junior sports management major who is one of the event’s organizers.

The first conference was held last year and one event organizer for this year’s conference, David Tews, said it was an important event for him to attend.

“I think it was probably the most useful experience I’ve had since coming to the department,” Tews, a sophomore sport management major, said.

Kaminski said a large assortment of different parts of the sport management industry will be represented at the event, including sports teams, agencies and marketing firms.

Students interested in attending the conference have to register on the event’s website, which is available through UMass Campus Pulse. Seventy seven students have registered to attend the event and registration will remain open until the day of the conference.

Of the 77 students registered, 30 study at colleges other than UMass.

The conference’s title sponsor will be the Anschutz Entertainment Group, a sports and entertainment presenter which owns and manages sports facilities such as the Staples Center in Los Angeles and the Colosseum at Caesars Palace in Las Vegas. Coca Cola, TD Bank, Walmart and Amherst Copy and Design are also sponsors.

The Mark H. McCormack Student Leaders Club, which is hosting the conference, is a student-run organization at UMass that focuses on providing sport management majors with experiential learning.