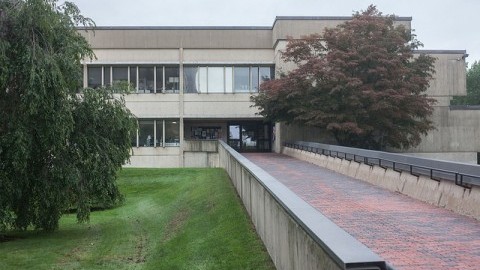 UMass.snap is an unofficial University of Massachusetts Snapchat story, a place where students can submit footage of the “real” UMass life. While a lot of the content might be illegal or lewd, there was some footage posted recently that was very disturbing. On a table with an American flag pattern, a few people were playing beer pong with a swastika on one side and a Jewish star on the other.  Three pictures of the game were shown, captioned “Jews vs Nazis.”

I took screenshots of these images and as I reflected more on these pictures, I felt upset, angry and ashamed that our community does not take seriously that 11 million people, including people of color, queer people, Jews, Christians, Romani, disabled people and more, were murdered under this banner. I am disturbed that there are people uneducated about and indifferent to the attempted genocide of my people 70 years ago, and that the symbol of my extended family’s murder is part of a game to play and drink around. What turned out to be even more disturbing was what occurred after.

I have experienced anti-Semitism on campus before, though none of it has been violent. I have had change thrown at me, both on campus and off campus.  People have made jokes about my nose, my major and more. I didn’t realize the number of other students who have had similar (and worse) experiences, even from just this past semester. Jewish students have been called kikes, an anti-Semitic slur, at the kosher dining section in Franklin Dining Commons, the only place on campus some Jews can eat, and in the very same snap story as these pictures, a video captioned “on my Jewish flow” showed a man picking up a coin.

Jewish history is a story of second-class citizenship, of forced isolations and expulsions, and of violence and genocide. The global Jewish population has never gone above 17 million people, which it reached in the 1940s before falling to 11 million. Recently, there have been rallies outside synagogues in France with shouts of “Death to the Jews” and “Hitler was right” (on Bastille Day, no less) in the past year and a Ukrainian mayor was elected a few weeks ago who is member of a neo-Nazi party.

America has been a haven for Jews by comparison. Growing up in the United States, I was in an environment where I was proud to be Jewish, to wear a kippah (a religious head covering) around without fear. I attended Jewish day school that did not have to masquerade as a municipal building or exist in secret in a basement. I was also taught to face the jokes, the assumptions, and the questions with humor and levity. I was told that I was representing our people, and that we needed to be grateful for how good we had it and keep our heads down. When they make jokes and laugh, laugh along. Our people have seen mountains, so let the molehills go.

According to UMass spokesperson Ed Blaguszewski, the University was notified about these offensive images via email in December and the UMass Bias Response team began “looking into the issue.” Blaguszewski said that the students in the images were identified within 10 days and “the matter was adjudicated under the Code of Student Conduct.” The school never issued a public response, but did respond to those that notified the news office of the image, per Blaguszewski.

These events happened over a month ago, and I am shocked that the University still has had no official response, not even reaching out to our Jewish community. It simply is not enough to find the people responsible and punish them, because these events are not isolated and are not solely about individuals.  Minimizing an incident and sweeping it under the rug only allows it to happen again. The University needs to be honest about what is happening. We are in college to learn, but we are exhibiting as a community that we are deficient in equally important areas. Long gone are the days when the Jewish community could only rely on itself in the face of these hateful ideologies, so where is the University? At UMass there is no room for ideas that strive to kill, and our community is teaching us not to be proud, but afraid of our Jewish identity.

As Tu Bi’Shevat, the Jewish holiday associated with the renewal of nature and the “birthday” of the trees and plants, was this past Sunday, it would be appropriate to quote the Talmudic story of Choni, a sage who happens upon a man planting a carob tree. Choni asks him why he would bother planting the tree, since he will be long dead by the time the tree bears fruit. He replies, “I found a fruitful world because my ancestors planted it for me. Likewise, I am planting for my children.” I call on the University not to ignore these problems any longer and work to prevent these acts and all like it on our campus.