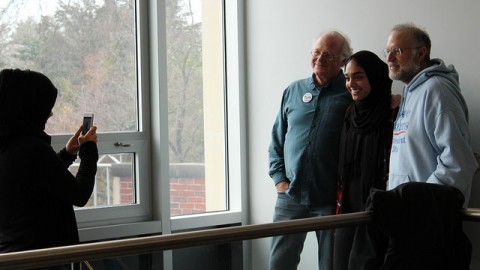 Cohen and Greenfield, who founded Ben & Jerry’s in 1978 out of Burlington, Vermont, talked enthusiastically about their nearly 30-year relationship with Sanders and how his run for presidency “will herald the end of politics as we know it,” in the words of Greenfield.

Whether he was campaigning to be mayor of Burlington starting in 1981, a member of the House of Representatives starting in 1991 or a United States Senator starting in 2007, Cohen said that Sanders has always beat the odds stacked against him.

“It was always the same story: Bernie’s not electable, he’s too progressive,” Cohen said. He went on to say that Sanders received roughly 70 percent of the vote in the last senatorial election, which Cohen credits to Sanders’ “authenticity” and his ability to connect with people.

“He’s motivated by deeply held values,” Cohen said. “For 30 years, he’s been fighting for the same things: people who aren’t represented by the U.S. government.”

Cohen and Greenfield said that they have been involved in Sanders’ campaign right from the start, from when Sanders’ announced his run for the presidency in May. They’ve traveled to Iowa, Minnesota, New Hampshire and elsewhere, now traveling to Massachusetts just six days before the state primary.

While Cohen and Greenfield attended a rally in Pittsfield Sunday night and were in Boston on Monday “scooping out free ‘Bernie’s Yearning’ ice cream,” their presentation at Smith represented their first time speaking to college students, according to Cohen.

Both Cohen and Greenfield emphasized how the circumstances around Sanders’ campaign clearly show that a “political revolution” is taking place, drawing on Sanders’ frequently used phrase.

“Usually, [voting means] picking the lesser of the two evils,” Greenfield said. “This is historic because [Sanders is] a candidate who is worth voting for.”

Cohen and Greenfield eagerly explained why they feel that way.

“He is the only person who’s willing to talk about how the political system and the economic system are rigged,” Cohen said. He added that Sanders rebels against the current structure by not taking money “from the pharmaceutical industry (or) from the oil and gas industry.”

Instead, Sanders relies primarily on public donations to fund his campaign, which Cohen says amount to $27 each on average.

Cohen and Greenfield also spoke of what Sanders plans are, should he be elected.

“Bernie’s basic overarching message is that we live in one of the wealthiest countries in the world and yet we don’t have some of the basic opportunities that they have in most other industrialized nations,” Greenfield said.

For example, he continued, Sanders “believes that in today’s world, a college education is equivalent to what a high school education used to be,” and that everyone should have the opportunity to pursue a higher education. Greenfield said that in order to fund making public universities tuition free, Sanders plans to impose a one percent tax on Wall Street.

Another component of Sanders’ campaign is his desire to establish a $15 minimum wage across the country, because “getting a job is meant to get you out of poverty, not keep you in it,” Greenfield said.

Greenfield also spoke of how Sanders intends to implement maternal leave funding that is matched by the employer and the employee, how he aims to provide jobs to decrease the 10 percent real unemployment rate and how he will work on “returning justice to the criminal justice department,” as Greenfield said the current system is not racially fair.

Along with Cohen and Greenfield, Christine Mikiewicz (a college planner/event organizer with the Sanders campaign) and Katie Hitchcock-Smith (president of the Smith College Bipartisan Coalition) urged the audience to vote in the primary on Tuesday. Mikiewicz and Hitchcock-Smith worked to organize the event.

So many students had attended, however, that they ran out of ice cream midway through serving, and offered to take photos with students instead.