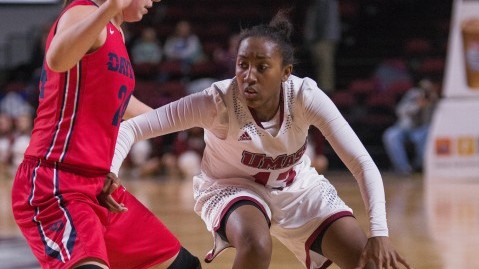 What a difference a win makes.

Fresh off a confidence-boosting win over St. Bonaventure that broke an 11-game losing streak, the Minutewomen responded with one of their most complete team wins of the season, beating Dayton 76-69 Wednesday night at Mullins Center.

UMass (8-17, 2-11 Atlantic 10) was once again led by the duo of sophomore guard Cierra Dillard and freshman guard Bria Stallworth. Leading the Minutewomen with 25 and 24 points respectively, Dillard and Stallworth contributed nearly two-thirds of the team’s offensive output Wednesday.

“They were definitely clicking on offense,” UMass senior forward Rashida Timbilla said. “When their first shot goes in, or their second shot, you know their confidence is going to go up, and they played with a lot of great confidence for a freshman and sophomore. They’re two great players and the future is bright for them.”

The Minutewomen carried a 59-45 lead into the final quarter before the Flyers sparked a comeback in the final frame, shrinking the deficit to as little as two points with five minutes to play. Christy Macioce knocked down three more 3-pointers and added another five points from the free throw line to spur the Flyers’ offensive resurgence.

But UMass fended off the comeback attempt to capture its second-straight victory at home.

Dayton (13-11, 6-7 A-10) jumped out to a 15-11 lead at the end of the first quarter, largely because of junior guard Macioce’s trio of 3-pointers, before the Minutewomen took complete control of the game in the second quarter.

Stallworth was a perfect 2-for-2 from beyond the arc and added another field goal to tally seven points in the second frame, in which UMass outscored the Flyers 28-11.

UMass coach Sharon Dawley was impressed with Stallworth’s resolve as a freshman.

“I didn’t know how Bria was going to respond to a game of this magnitude being a freshman, and I think she managed it really, really well,” Dawley said. “She made some big shots that were drop dead beautiful.”

When Stallworth was knocked out of the game for a few minutes with an injury, junior guard Alyx Stiff filled in admirably, contributing five points.

Dillard remained dominant in an evenly-played third quarter, tallying 10 points in the frame, leading the Minutewomen to a 59-45 lead at the end of the third quarter.

“She’s a gamer,” Dawley said. “The lights are on and this kid is going to have a quality game.”

Stallworth echoed her coach’s sentiments about Dillard’s ability to come through in the clutch.

“That’s the performance we need out of her,” Stallworth said. “She steps up when we need it and makes big plays. Without Cierra, some of this wouldn’t be possible.”

The Minutewomen’s effort on the boards was one of the keys to the team’s victory. Dayton is a team with a height advantage, but the Minutewomen out-rebounded the Flyers 44-39.

“I thought our boxing out was great,” Dawley said. “That’s how we got them in foul trouble because we got some key over the back calls. That was Rashida and Kymber (Hill) and Maggie (Mulligan) doing a phenomenal job boxing out. We wouldn’t have won without the box out.”

The two teams turned the ball over at relatively the same rate, 16 turnovers for Dayton and 14 turnovers for UMass, but it was the Minutewomen who took advantage of their opposition’s mistakes, tallying 13 points off turnovers compared to four from the Flyers.

The Minutewomen will be looking for their third straight win when they take the road to face Davidson Sunday.