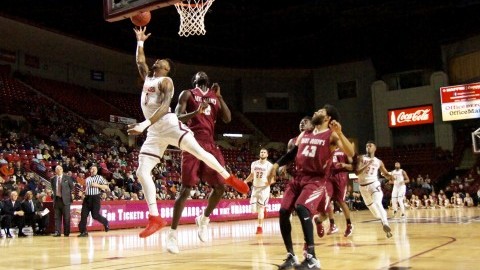 With six minutes, 14 seconds remaining, there was still a chance.

Despite how poorly the Massachusetts men’s basketball team played up until that point Wednesday night against Saint Joseph’s, the Minutemen (12-15, 5-10 Atlantic 10) were in striking distance.

With Hawks forward DeAndre Bembry sitting comfortably on the bench with four fouls and 11:03 remaining in the game, UMass went on a 11-2 run with nine of those points coming from Donte Clark (20 points) to bring the Minutemen within single digits.

“I thought we took a little bit of an advantage, probably not as much as we could have or should have,” Minutemen coach Derek Kellogg said.

Bembry returned to the game as St. Joe’s (23-5, 12-3 A-10), now tied with Virginia Commonwealth and Dayton for first place in the A-10 after the Rams lost to George Mason Wednesday, pulled away for a 74-57 win at Mullins Center.

Bembry, who finished with 18 points and nine rebounds and dominated the second half of the game, is now 5-0 in his career against UMass.

“There were a lot of unforced turnovers and I just knew if I could get back and calm the team down I could just make the right plays and that’s what happened,” Bembry said.

“He has something to say to every player on every play and they respond to that,” Hawks coach Phil Martelli added. “Ironically, going through the airport Saturday night coming back from Davidson I said that was the first game where (he) didn’t talk … but this game, even on the bench, he was as vocal as any coach.”

After a pair of made free throws by Isaiah Miles gave St. Joe’s a 61-51 advantage, the Hawks quickly gained momentum after Bembry blocked a Trey Davis layup and Papa Ndao drilled a 3-pointer in the corner to put the nail in the Minutemen’s coffin.

Miles (team-high 20 points) converted a mid-range jumper and on the ensuing possession Bembry stripped Jabarie Hinds for an easy breakaway drunk. After Hinds missed a 3-pointer (UMass shot 2-of-22 from deep), Miles drilled a 3-pointer of his own to give the Hawks a 71-51 lead with 2:52 remaining.

“That happens a lot of times when your best player comes back in,” Kellogg said of St. Joe’s run when Bembry returned.

“He’s pretty mature with the way he plays and I think he settles them down. The way he operates with his teammates, I think he’s a calming influence. They know he’s a good player. When I saw him come back in, I thought he was going to help them settle some things down,” Kellogg added.

The Minutemen opened the game with a 10-4 lead at the first media timeout thanks to a pair of layups from both Tyler Bergantino and Antwan Space. However neither team separated themselves in the first half as neither side extended its lead to more than nine. The Hawks took a 35-31 lead into halftime.

Bembry scored on three straight possessions and was in full take-over mode before picking up his fourth foul with 12:05 remaining sending him to the bench.

“He makes them one of the elite teams in the league because of what he does for them on both ends of the floor,” Kellogg said. “I’ve got a lot of respect for Saint Joseph’s. I think that they are at least really close or the best team in the conference. They’re pretty well put together with maturity, guys that know their role and are talented, so it’s a good combination for them.