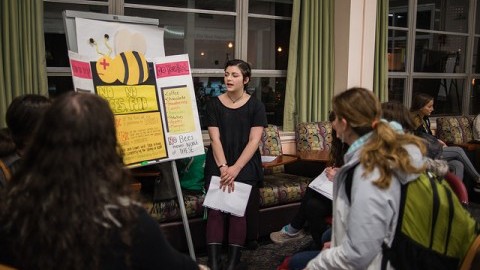 Dean Cycon, a social activist who founded the organic and fair trade Dean’s Beans company based in Orange, spoke at the first MassPIRG meeting of the semester Wednesday in the Cape Cod Lounge.

Cycon, a MassPIRG graduate, told the roughly 80 people in attendance that the success of their activism would be dependent on more than simply doing the right thing.

“The takeaway from all this is you have to find not necessarily what you want to do, but who you are as a person and how you can interact with it,” Cycon said.

Cycon, who initially worked as a lawyer involved with environmental law cases on Native American reservations after working to campaigning to stop uranium mining on those reservations to oppose nuclear proliferation, said that his old job did not satisfy him.

He said while his job allowed him to pursue a righteous goal that he supported, his inability to directly confront environmental issues as a lawyer troubled him.

“Unless you really confront the paradigm, all you’re doing is putting out little brush fires along the way,” he said.

“All I was doing was making an unfair system a little kinder,” Cycon added.

Cycon said his background in working with indigenous peoples, who he said make up the vast majority of coffee growers, gave him a unique insight which helped him interact with them and understand the social and legal issues facing indigenous peoples in their native countries.

In 1993, Cycon started Dean’s Beans, which sells high quality coffee in a way that he hopes supports social justice and helps growers directly.

“We were the first 100 percent organic fair trade company east of the Mississippi,” he said.

Today, Cycon said Dean’s Beans operates in 14 countries and runs unique social programs in each of them, such as community based cervical cancer programs in Ethiopia and confronting issues gender violence in Rwanda.

Cycon cited the Nobel Prize for Business, which Dean’s Beans won two years ago, as a “pretty big deal.”

“We get a lot of international recognition, but our business model is very different so no one knows us,” he said.

Cycon also talked about presidential politics in his speech, describing Hillary Clinton as “more of the same” and unwilling to fix the system, while saying that although Bernie Sanders is “where you want to be,” as a candidate, he might be incapable of effectuating change in the current Congress.

“Where does that leave you as an activist?” he asked. “It’s tough. There are no right answers.”

Cycon encouraged the members in attendance to work in activism as a smaller part of a larger system, and to “add (their) light to the sum of all lights.”

“You got to do what you love and not what you think is the right thing to do,” Cycon said. “Or you’ll burn out.”

Marie MacCune can be reached at [email protected] or followed on Twitter @MarieMacCune.