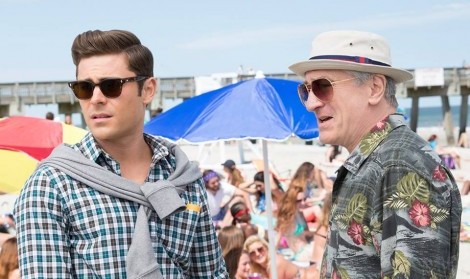 “Dirty Grandpa” was a rough watch.

This movie clearly has no filter. There is plenty of uncomfortable material throughout – the film features crude sexual content including animal ejaculation and severe profanity. Yes, I understand that “Dirty Grandpa” is an R-rated comedy. However, I believe a movie of this variety should still have a limit. Movies like “Ted” and “The Hangover” had a sense of restraint that “Dirty Grandpa” evidently lacks. Many of the jokes in the film reach so far that they simply feel unfunny.

“Dirty Grandpa” stars Robert De Niro as Dick Kelly and Zac Efron as Jason Kelly, Dick’s grandson. After Jason’s grandmother dies, Dick asks Jason for a ride to Florida, because Dick and his wife used to go down annually at this time of year. On the way, the two men get caught up in a wild spring break at Daytona Beach where they meet Shadia (Zoey Deutch) and Lenore (Aubrey Plaza). They pair up quickly – Dick with Lenore and Jason with Shadia – and Jason questions his choice to marry his uptight fiancée Meredith (Julianne Hough).

First-time screenwriter John Phillips penned the script for “Dirty Grandpa,” with Dan Mazer at the directorial helm. They manage to make the story interesting at the very least, effectively juggling several moving parts. And the romantic intrigue kept me in suspense right up to the end of the film.

Don’t get me wrong. “Dirty Grandpa” was not the worst movie ever. There were some good laughs. However, if the cast didn’t spend half the movie talking about ejaculation and raunchy sex fantasies, “Dirty Grandpa” might have been more enjoyable. This movie totally went out of my comfort zone and took jokes to the extreme.

The film’s major flaw is that it simply tries too hard. Aside from the intense content, underdeveloped characters and repetitive action leave “Dirty Grandpa” an overall forgettable comedy. Much like “Daddy’s Home,” “Dirty Grandpa” traps several solid comedic actors in a mediocre movie. Sitting through it felt like watching poor stand-up comedy. I almost felt bad for the person on the stage – or in this case, on the screen.

“Dirty Grandpa” is not a movie to see if you take offense to anything. The writers of this script seem to have found a way to repulse just about every person on the planet.

Then again, it wasn’t a terrible movie if you are prepared for very intense ribald humor. There certainly are some laughs, but the over-the-top gags and confusing side characters prevent this movie from being great.