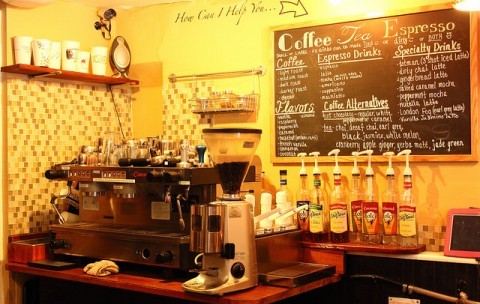 (A variety of beverage options at the Freedom Cafe. Devin Colon/ Daily Collegian)

The Freedom Café is looking to relocate its business of operation in the southeast area of the University of Massachusetts campus later in the year.

Located north of the UMass campus, the Freedom Café is a nonprofit coffee shop, serving a variety of caffeinated beverages and tea. The proceeds go toward charitable causes working to end human trafficking, according to the café’s website.

The café, in its current location at 768 North Pleasant Street, is about 100 square feet in size, including the space where volunteers serve beverages. About four volunteers can work in the space at once.

“That’s what makes us unique,” said Fallon Lundgren, a UMass senior majoring in political science, who has been volunteering for the café for over a year. “People like to compliment on (the café’s) cuteness, but we do need bigger space.”

The reason for the move is to provide students with more space to socialize. The new location would be 10 times larger than its current location. The new space would also seat 18 people at once.

“(In) areas in India, it is part of the culture to sell daughters toward human trafficking for money,” Johnson said.

The café is looking into moving in the basement of the First Baptist Church. The church is located on North Pleasant Street, across the street from the Isenberg School of Management. Johnson said that the café would be separate from the church.

The church has already given the go-ahead for the café to relocate in the basement. Johnson stated that he is currently in the process of having relocation plans approved by the town of Amherst. If the town rejects the plan, the Freedom Café will have to stay in its current location, Johnson said.

Freedom Café is looking into launching a Generosity.com fundraising campaign later in the semester. The café is trying to raise $18,000 dollars to fund the relocation. Customers can donate to the cause right now by adding a tip on checkout. All tips received will go towards the relocation of the café.

“I’m excited,” said Molly Valcour, a UMass senior majoring in business management who has been a volunteer for three semesters. “It’s great to see more students.”

Freedom Café recruits around 150 volunteers every year, as the majority of volunteers are UMass students. The café serves between 30 and 40 customers per day.

The organization held an open mic night to raise money for charity to aid victims of human trafficking. At the end of the night, over $100 dollars was raised.

“We found out about it and we wanted to do something about it,” Johnson said.

Johnson hopes that the café can raise enough funds to build a vocational center in India every two years.

Daniel Cordova can be reached at [email protected] or followed on Twitter @DanielJCordova.

Editor’s note: A previous version of this story incorrectly identified the cafe’s fundraiser as a Kickstarter campaign. It has since been corrected.