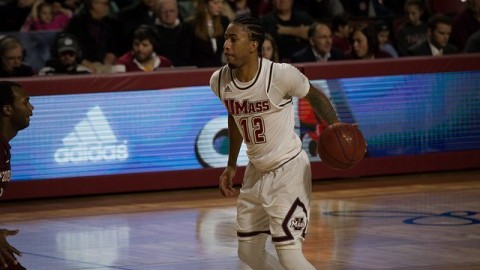 An 0-for-11 shooting performance is tough for any basketball player to bounce back from and put in the rearview mirror. But for Massachusetts senior guard Trey Davis, that’s exactly the challenge heading into Thursday’s matchup with second-place Virginia Commonwealth.

“I made shots (in practice Monday), so my slate is wiped clean,” Davis told reporters Tuesday at practice. “I’m good on that, I just want to come out and win.”

“Obviously we’d like to have a few more (wins) and that makes things easier, but you do get your character tested as a player when the wins aren’t coming,” UMass coach Derek Kellogg said. “I think it will continue to be a character builder for these guys to come out of it.”

VCU comes into Amherst Thursday with a little bit of a different look this year as Shaka Smart – who coached the Rams for six seasons and implemented his signature “Havoc” high-pressure defense – left for the head coaching position at Texas, where he’s led the No. 24 Longhorns to a 16-7 start to the season.

But despite Smart’s departure, VCU still likes to play at an up-tempo pace and applies a similar half-court press defense under coach Will Wade.

“I think in the half-court it makes some guys have to make plays even more so than the full court and it’s a little less dictated,” Kellogg said. “I think in practice we just have to put some guys in some positions where they are accustomed to being and see how they handle it… Some guys might have to play in different spots and be able to make plays, which at times has been difficult for us throughout the year.”

“I guess you just pass the ball up when they come up and try to double you or try to split it or just try to get a bucket out of the situation,” Davis added about attacking the Rams’ press defense.

Melvin Johnson (18.7 points per game), JeQuan Lewis (11.4) and Korey Billbury (10.8) lead VCU offensively, with the first two being experienced holdovers from Smart’s time at the helm. Billbury transferred to the Rams after three seasons at Oral Roberts. On defense, the trio has combined for 101 of the Rams’ 223 (45 percent) steals this season.

Kellogg said in order to counter the pressure from VCU’s backcourt, UMass will try to consistently attack the paint against the Rams’ bigs.

Kellogg particularly noted that freshman center Rashaan Holloway’s 6-foot-11 size may be an advantage in finding success in the post, although he hasn’t played many minutes so far against guard-heavy, up-tempo teams.

“We do have some size, I don’t know how much Rashaan will be able to play with the speed of the game and also foul trouble has plagued him some, but he does give us a different dynamic,” Kellogg said. “I’m trying to get him some playing time because I do think he’s a guy in this last run here, where if he can establish some post presence, we have a chance against some of the better teams in the conference.

“You don’t want to get away from your style of play, just to say we’re going to allow him to get in there. But I do think being smart against teams like VCU and the teams that can put up some points quickly is something that we definitely have to do because I don’t think that we can score point-for-point with some of these teams.”

Thursday night’s matchup at Mullins Center will tip off at 7 p.m. and can be seen on ESPNU.

Editor’s note: A previous version of this story said VCU’s Korey Billbury was a holdover from Shaka Smart’s time as coach of the Rams. Billbury is playing his first season at VCU after three years at Oral Roberts. It has since been corrected.