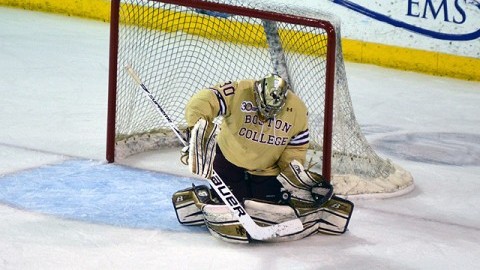 No. 5 Boston College continues to roll over the Hockey East conference.

A goal coming off the stick of junior forward Austin Cangelosi just 16 seconds into the game sealed a 4-0 shutout victory for the Eagles over Notre Dame Friday night at the Compton Family Ice Arena in South Bend, Indiana.

The loss for the Fighting Irish was their first in 13 games. Over the course of the past 12 contests, they had outscored conference opponents 48-19. Four of those goals had come in a narrow 4-3 victory over the Eagles on Dec. 10 at Conte Forum.

BC goaltender Thatcher Demko had 28 saves, earning his eighth shutout of the season. The goalie has been very solid for the Eagles this season despite missing time with injury, as he earned his 16th victory of the year. In the opposite net, sophomore goaltender Cal Petersen saved 35 of 39 shots as both goalies made big saves throughout the course of the game.

The teams were a combined 1-for-10 on the power play, an uncharacteristic stat for two high-scoring offenses. Notre Dame skated with BC in the first period, putting 14 shots on net to the Eagles’ 11, but hit a speed bump in the second period and would only muster 14 more shots in the game’s final 40 minutes.

BC kicks off the Beanpot Tournament Monday against Harvard, while the Irish must wait until Friday to face off against Vermont.

A pair of Sacred Heart goals in the game’s first 29 seconds proved to be a sign of things to come, as the Pioneers would score five more in a back-and forth win over Connecticut at Hartford’s XL Center this past Tuesday.

Sacred Heart improved to 10-13-3 and snapped a two-game losing skid, while the Huskies fell to 8-15-3 and 4-8-3 in Hockey East play. UConn has just three victories in their last 11 contests.

Pioneer forwards Justin Danforth and Jeff Carroll each scored twice, on their way to their largest goal total on the season. Danforth also added two assists in the win.

Huskie freshman Max Letunov continued his hot play for UConn, scoring two goals in the game’s opening period. He now has goals in his last four games, and boasts team-high’s of 13 goals and 29 points on the season.

The Huskies tied the game at 12:15 in the second period, but Sacred Heart responded with back-to-back goals, pushing their lead to a margin that the UConn would never match. The Huskies are now tied for seventh in the Hockey East conference, in the midst of an underwhelming 2015-16 campaign.

Providence, which is 9-1-2 at home, won their 17th game this year, fighting to remain in contention near the top of the Hockey East standings. Meanwhile, the Wildcats dropped their seventh straight game. Prior to UNH’s 3-1 upset Saturday night, it had only two wins in HEA play.

Junior goalie Nick Ellis had another strong outing for the Friars, stopping 25-of-26 shots in the victory. Ellis earned his 16th win this year and has been a large part of Providence’s success in the 2015-16 campaign.

The first goal of the game came 3:38 into the second period when senior forward Trevor Mingoia scored on a rebound from forward Mark Jankowski. Jankowski then scored a goal of his own in the third period, which would prove to be the game-winning goal. Senior forward Steven McParland added an insurance goal on an empty net with 25 seconds remaining to top it off.

Providence will play six more games before finishing their season with a weekend home-and-home series against Massachusetts.