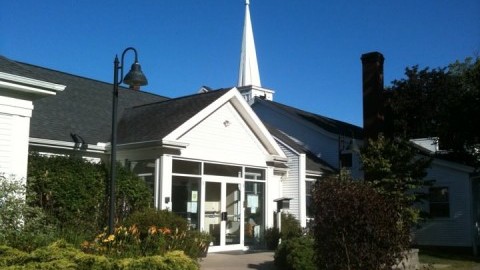 The Jewish Community of Amherst hosted a benefit program for Syrian refugees based on Barbara Abdeni Massaad’s book “Soup for Syria” at 4:30 p.m. Sunday.

The program, which was attended by roughly 150 people, featured speeches about the Syrian refugee crisis, a musical performance and a meal of three soups from Massaad’s book. According to Judith Souweine, chairperson Tikkun Olam for JCA, the event raised over $5,000.

“We have a chance this afternoon to share some of the pleasures of life with each other, and in the midst of that to focus on some of the horrors of life,” said Rabbi Ben Weiner, the spiritual leader of the JCA, speaking in the main sanctuary of the building.

Weiner described the Jewish people as having a unique responsibility to support refugees due to lessons in the Torah which remind Jews that they were once “strangers” in other lands, and as a result of Jewish people having been the victims of a humanitarian crisis in living memory during the Holocaust.

David Mednicoff, director of Middle Eastern studies at the University of Massachusetts and a member of the JCA, spoke next, calling the Syrian refugee crisis the single largest humanitarian crisis to face the Earth since the aftermath of World War II.

“We are at an especially delicate moment in the Syrian refugee crisis,” said Mednicoff, adding that the long scale of the crisis had resulted in a “moment of global compassion fatigue,” by which the size of the crisis has made it seem unsolvable.

Mednicoff said that over 6.5 million Syrians had been forced to abandon their homes since the beginning of the Syrian Civil War, with 1.2 million of those refugees created in the past year alone.

He added that countries which had taken in a proportionally large number of refugees, such as Germany and Sweden, were beginning to face internal backlash over the migration of displaced persons within those nations.

“In the very globalized world we live in neither closing our minds nor our borders to the mass displacement of people will keep the problem away from us,” Mednicoff said. “Leaving millions of Syrians in a warzone or transitory living space is a recipe for long-term political disaster.”

Mednicoff encouraged the audience to learn more about the Syrian refugee crisis through organizations such as the United Nations High Commissioner for Refugees, to understand concrete ways to help displaced people from Syria.

Michel Moushabeck, the founder of Interlink Books, spoke next to describe how his publishing company came to release Massaad’s book.

Moushabeck said that Massaad, while living in the Beqaa Valley in Lebanon near a refugee camp, was surprised one night by how cold she was while wrapped in a blanket and imagined that the conditions must be significantly worse for refugees.

Massaad began bringing soup supplies to the nearby camp the next day and feeding families there, which led her to suggest the idea of using the profits of a cookbook to raise money for Syrian refugees.

“We produced this book in about a six-month period,” Moushabeck said. “We published it last November.”

Moushabeck added that the cookbook has been extremely successful so far, with 30,000 copies in print of the United States edition, and he said all profits of the book would be donated to the UNHCR and to local relief organizations in the Pioneer Valley.

After speaking, Moushabeck played percussion in a Middle Eastern musical performance with three other artists, who played the clarinet, piano and oud, an instrument historically related to the guitar.

Michael Kane, a founding member of Valley Syrian Relief Committee in Northampton, encouraged donations to the Syrian American Medical Society Foundation, a nonprofit organization which works to establish medical relief and healthcare development for the people of Syria.

“They’ve done work with over 800 physicians and provided training for medical care people in Syria,” said Kane, as baskets for donations were passed around the room.