Just another night at the Mullins Center for UMass hockey 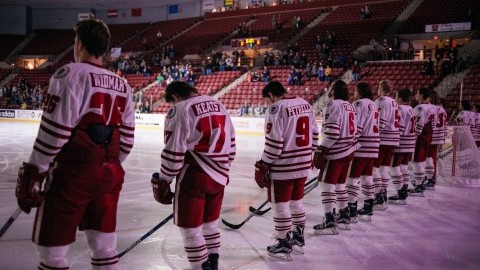 It was a cold and grey winter day in Amherst, Massachusetts, and it turned into a night of low temperatures and a hellish wind chill. Inside the Mullins Center, after 60 minutes of hockey, the scoreboard read “Northeastern 5, UMass 0”. Attendance was sparse, and the Massachusetts hockey team had just been beaten by an in-state Hockey East rival.

In other words, it was just another night at Mullins for UMass (8-18-4, 5-8-4 HEA) and its fans, a tired scene that’s played out too many times over the years. Tonight, the loss happened to come against the Huskies(11-13-5, 5-8-4 HEA), but the game itself could have been any other home loss.

Official attendance was listed at 2,111, but felt like much less inside the cavernous arena. A loyal group of eight rows of students filled one section behind the south goal, but that was about it for student presence on the evening. Of the thousands of undergrads living within walking distance of the Mullins Center on campus, they were the only ones who knew or cared that there was a hockey game. After the second period, many of them filed out, presumably to find something more fun to do.

In the general admission sections, as usual, there were far more empty maroon seats than occupied ones.

Who could blame fans for staying away? The product on the ice has been below average for years, and the Mullins Center has turned into a boring and quiet building to watch a hockey game.

After a thrilling first period that saw 11 shots on net combined between the two teams, Northeastern scored just 24 seconds into the second period to take a lead it would hold for the rest of the night. When Huskies captain Kevin Roy scored 5:11 later to give Northeastern a 2-0 lead, it started to feel like another one of those nights for the Minutemen.

The end result was a 5-0 loss to the Huskies, which has dominated the Minutemen at Mullins. In their last 11 trips to Amherst, the Huskies are a remarkable 9-1-1.

“I know we’d played well here. I didn’t know that was the number. I don’t know what it is,” Northeastern coach Jim Madigan said. “We come up here usually the night before. We get into a good state of mind, there’s no distractions … We’re in a pretty relaxed atmosphere.”

Whatever the cause may be, opposing coaches should not be using phrases like “no distractions” or “pretty relaxed” to describe a road trip.

It was the 11th home loss for UMass in 14 games at Mullins this season. Going back to the start of last season, the Minutemen are 8-21-2 with home-ice advantage.

A telling moment for the program came between the second and third periods, with UMass trailing 3-0. A local business sponsored a t-shirt toss, and fans went wild as marketing representatives flung shirts into the stands. It was one of the loudest moments of the night in the arena.

With five minutes left in the game and Northeastern on the power play, the silence in the building was deafening. It didn’t seem possible that a building which holds close to 10,000 people could ever get that quiet during a game. Just like the team on the ice, the fans were lifeless and defeated.

It’s too late for things to change at Mullins Center this season – the Minutemen have just one home game remaining and it comes against defending national champion and No. 5 Providence. And with the body of work UMass has displayed at home, it’s hard to be optimistic about any dramatic turnaround for next year.

Just like an Amherst winter, games at Mullins Center have been cold and unforgiving to the Minutemen and their fans, and tonight was only the latest example.