Justice Scalia was on the wrong side of history 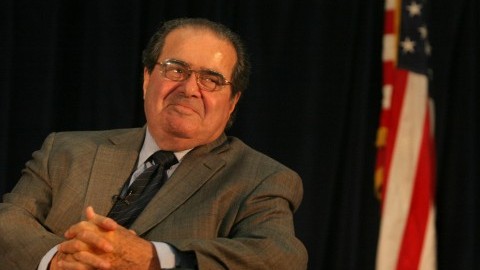 When looking back on the life of Antonin Scalia, we should not cloak ourselves in disingenuous awe because of his recent passing. While an obituary has its place, death itself is meaningless in evaluating one’s legacy, since death is one of two certainties in life. Those in power, such as Barack Obama, are politically obligated to act with false piety regarding even a great scourge of the values of our nation.

Respect for Scalia does not stem from his work nor from his opinions. It comes only by association with the Supreme Court, one of the truly great institutions left in the United States. To me, Scalia does not deserve to be looked upon favorably for his role in staining the judicial branch with political petulance and white supremacy.

I will remember Scalia most for his role in Shelby County v. Holder, a tragic misstep that brought drastic consequences for minorities in America. When Scalia moved with other conservatives on the court to repeal the coverage formula and other crucial provisions of the Voting Rights Act of 1965, he showed that he had no interest in originalism or equal protection. The Voting Rights Act was deeply steeped in the sentiments of the 14th and 15th amendment. In crippling it, Scalia took a radical step to weaken the constitutional principles that he pretended to abide by.

Any Scalia supporter who defends his support of originalism would be forced to conclude that he acted out of racial prejudice and inability to relate to the modern struggle of non-white voters. This is a perfect example of the kind of policy that a University of Chicago study showed in 2015 to overwhelmingly reflect a tendency of white Americans in power to continue their perpetual supremacy over non-white Americans. As Ruth Bader Ginsburg predicted in her dissent, new waves of voter ID laws and discriminatory changes have swept previously covered districts in the wake of Scalia’s worst decision.

Depictions of Scalia as an originalist miss the point that while he usually employed a holier-than-thou foreknowledge of the meaning of the Constitution, he put on rose-colored lenses on more than a few occasions to completely dismiss his own ideals in favor of advocating for conservative ideology. Although I’m unqualified to evaluate his entire 30 year stay on the bench, it does not take a legal expert to see that in “McCutcheon v. FEC,” Scalia decided that corporate free speech was not only a force too weak to corrupt the state interest in fair elections, it was also the only speech in America that should not be assessed with reasonable limits.

This position, while technically grounded in a blasphemous original ideal, becomes even less tenable when considering Scalia declared that the contributions of Super Political Action Committees would be made independently of candidates that they supported. In the disastrous electoral reality of post-Citizens United America, Scalia has been indisputably proven wrong. Such naïve insistence from an otherwise brilliant individual leads any reasonable viewer to conclude that his decision-making was consistently influenced by political motive covered only by the thinnest veneer of alleged Constitutional interpretation.

General allegations of high court partisanship are both unfounded and understandable, but justices like Antonin Scalia give the court a bad name on the issue. While the court is the one body of our government that has no obvious financial or political motive to act, Americans still generally interpret decisions and opinions with a left-right dichotomy and ignore the true validity of interpretational style. While other justices on the court were more consistent in justifying their opinions through interpretation, Scalia failed that test with the benefit of hindsight.

I won’t remember Antonin Scalia as a fierce originalist, a brilliant writer or a charismatic man with an admittedly tough job. I will remember him as a bastion of interpretive bankruptcy, a barrier to social change, and most of all, a disgrace to the most hallowed halls of our country. Much like a Facebook post from your uncle opening with the words, “I’m not racist, but…” Scalia’s sheer attempts at interpretation and obvious facades in his own image threaten to delegitimize the Supreme Court and by extension the entire United States government. I look forward to moving on in the 21st century without him or his “legacy.”