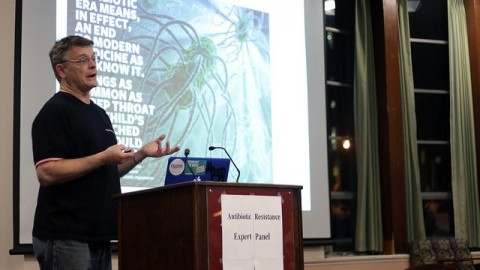 More than 150 students filled the Cape Cod Lounge of the Student Union Tuesday evening for a forum organized by MassPIRG, where four speakers spoke on the overuse of antibiotics on factory farms and its repercussions on human health.

MassPIRG has focused much of its efforts in recent months to calling on chain restaurants to discontinue the use of meat raised using antibiotics. The forum, featuring two professors, a doctor and a U.S. PIRG representative, served to help students understand the reasoning behind MassPIRG’s mission.

Mitchell Walkowicz, a lecturer in the microbiology department at the University of Massachusetts and the first speaker of the evening, showed students a chart illustrating that 80 percent of all antibiotics are used on factory farm animals.

The reasoning, Walkowicz explained, is that animals given antibiotics will experience increased lifespans and greater suppression of diseases. Additionally, the animals tend to grow larger and faster, and the shelf life of their meat is extended.

This unnecessary use of antibiotics on factory farms has also proven detrimental to human health, as humans who are overexposed develop antibiotic resistance. The bacterial organisms that incite disease adapt as a result of the overexposure, to the point that antibiotics are no longer an effective cure, the forum members explained.

To explain the process, Joanne Levin, an infectious disease specialist at Cooley Dickinson Hospital in Northampton and the second speaker of the evening, used a real-life case that her colleague experienced with a patient, which Levin referred to as “Mr. LR.”

Mr. LR, a 68-year-old man with a variety of ailments, frequently sought treatment for bronchitis and pneumonia.

“Even before we’ve given him any antibiotics, he has a little resistance,” Levin said, pointing to charts that recorded the subject’s resistance to different available antibiotics.

After numerous relapses and treatments, the patient became resistant to all but one available drug, Tobramycin, a toxic antibiotic that causes kidney disease. His doctors grew increasingly concerned about what they would use to treat him if he were to relapse again.

However, “after not taking antibiotics for six months,” Mr. LR’s resistance to antibiotics dissipated, a story which Levin says clearly demonstrates the effects of being overexposed to antibiotics.

A further aspect of the problem, Levin said stems from patients asking for antibiotics and doctors being afraid of undertreating their patients and receiving lawsuits as a result.

Margaret Riley, a biology professor at UMass and the forum’s third speaker, acknowledged the need to discover new antibiotics that bacteria would not yet be resistant to.

“Our pipeline is empty for new antibiotics,” Riley said, going on to explain her own work developing bacteriocins, which she calls “a natural choice for preventive or therapeutic applications” that are currently being studied in clinical trials.

After listing over a dozen organizations – including MassPIRG – that have recognized the problem of antibiotic resistance as a legitimate concern, Riley called for the need for legislation limiting the use of antibiotics on factory farms.

“Do we want food production to determine the efficacy of our lifesaving drugs?” Riley asked the audience. “The (United States) has yet to say ‘no.’”

“It is estimated that if we continue this trend, by 2050 more people will die (as a result of) antibiotic resistance than cancer,” said Allison Kerelo, coordinator of MassPIRG’s campaign to stop the overuse of antibiotics.

Matt Wellington, the antibiotics program coordinator with U.S. PIRG, rounded out the evening by explaining exactly what MassPIRG has been doing to combat the problem of antibiotic resistance.

“When we first starting working on this issue, we were targeting the Obama administration,” Wellington said, adding that the organization hoped to see legislation enacted that would regulate the use of antibiotics on factory farms. “We realized that restaurants like Chipotle, Panera, Chick-fil-A, they were already serving meat raised without antibiotics.”

From there, MassPIRG shifted its focus to chain restaurants. McDonald’s and Subway have already agreed to limit their use of meat raised using antibiotics.

“We’re not going to stop there,” Wellington said. “We have a vision to get five big chain restaurants to stop using antibiotics by the end of 2016.”

MassPIRG’s current target is Kentucky Fried Chicken, although Taco Bell, Olive Garden and Applebee’s could be on the organization’s agenda in the future.

“The more visible we can be, the more we can demonstrate our support, the better chances we have,” he said.