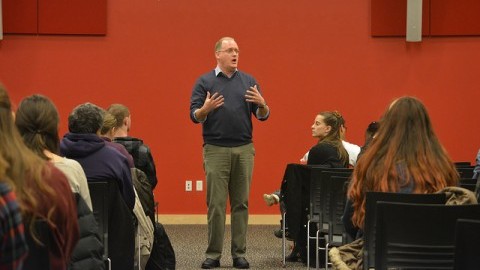 James Holden, a microbiology professor at the University of Massachusetts, led a discussion Tuesday in the Commonwealth Honors College events hall, which explored the intersection of science and religion.

Holden attended the University of Washington where he received a Ph. D. in oceanography before earning his post-doctor at the University of Georgia. He then went on to further his science career through numerous analytical deep sea ventures, partnership in several NASA projects and independent research in microbial physiology, said Alexandrina Deschamp, interim associate dean of the Commonwealth Honors College. It was around then, said Holden, that he began searching for greater meaning and purpose, which he eventually found in the roots of Christianity. In his talk, Holden drew on his experience as a scientist and devoted Christian to address the question of whether science and faith can exist simultaneously or are by nature contradictory.

Holden’s talk was largely driven by questions from members of the audience, which sought to discover how science and religion can coexist and where, if anywhere, their limits lie. In his view, many issues we face today, from sustainability to technology and natural disasters, have not only a scientific element, but a societal or moral component as well. It is in this intersection that the overlap between science and faith becomes apparent, he said. According to Holden, science and religion both exist as truth.

“This doesn’t mean that science and religion agree on everything, but I’m at peace with these two aspects of my life being together as one” said Holden.

Emphasized in Holden’s talk was his belief that the only way for society to progress is with respect and open-mindedness, regarding those beliefs that differ from one’s own.

Many of the questions addressed by Holden focused on a handful of topics ranging from the reconciliation of religious ideology with real-world tragedies to the seemingly contradictory relationship between faith and scientific fact. Holden cited the former as “the most challenging question to (his) faith.”

Holden also addressed a question regarding the apparent conflict between the concrete foundation of science, which relies heavily on fact and the search for knowledge, and the more ambiguous notion of faith. In response, Holden stated his belief that the two areas exist in separate domains. That is, the substance of religion exists outside of science’s area of space, energy, time and matter, which by contrast is where science takes place.

Also among the most highlighted points was the necessity of an appreciation for a diversity of beliefs, Holden said. He acknowledged that he does not have all the answers and recognizes that, in fact, the answers are not always black and white. Some things are, and will likely remain, unclear, but this connection between science and religion has allowed him to find greater meaning, said Holden.

Tara Dowd can be reached at [email protected]