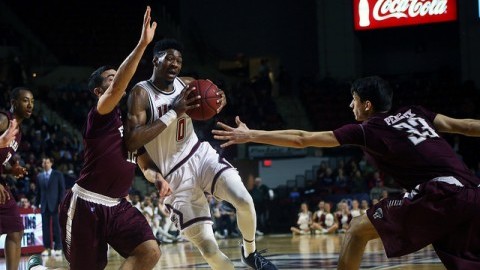 Shaka Smart built the Virginia Commonwealth men’s basketball program from what was once a Colonial Athletic Association Cinderella team into what is now a consistent powerhouse in one of college basketball’s preeminent mid-major conferences in the Atlantic 10.

In just his second season, after being selected as an at-large bid in the 2011 NCAA tournament, VCU defeated Southern California in the First Four round before eventually making a run to the Final Four and falling to current Boston Celtics coach Brad Stevens and Butler.

Since the Final Four run, the Rams have made the NCAA tournament each of the last five seasons. VCU also won the A-10 title last season, defeating Dayton 71-65 in the championship game.

But prior to the start of the 2015-16 season, Smart left the Rams to take the job with No. 24 Texas after the Longhorns parted ways with longtime coach Rick Barnes.

But even with Smart’s departure, the Rams haven’t skipped a beat. New head coach Will Wade has VCU currently ranked second in the A-10 and previously on a 12-game winning streak before falling to George Washington 72-69 last Saturday.

“They’re pretty similar in record, RPI, fan support and things of that nature. I’d say he’s done a good job of taking his own identity, but also there was some building blocks that were already there,” Massachusetts coach Derek Kellogg told reporters when asked about the similarities between Smart and Wade prior to Tuesday’s practice.

“They have a good brand and they play a good style of basketball. It’s a little different in how they are doing it, but not as much people might think. He worked under Shaka, he did some similar stuff in his years at Chattanooga so it’s not out of the equation to say they are pretty similar.”

While the Rams don’t use the same ‘Havoc’ – full-court, in-your-face defense – that was implemented by Smart, VCU still plays an aggressive defense. However, under Wade, the Rams focus more on half-court trapping.

The Rams lead the A-10 with 223 total steals and average 9.7 steals per game. No other conference team has more than 200, with the closest being Fordham’s 186.

“They play more of a half-court trap and stuff like that. They’re a good, solid team so we just have to be focused and try to come out and play hard,” Davis added.

“I think in the half court it makes guys some guys have to make plays even more so than the full court and it’s a little less dictated. I think in practice we just have to put some guys in some positions where they are accustom to being and see how they handle it,” Kellogg said.