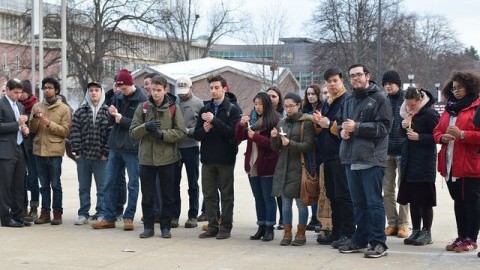 Khalif Nunnally-Rivera, Student Government Association Secretary of Diversity and junior studying geography at the University of Massachusetts, said the campus has always dealt with issues of racial hatred in reference to recent acts of racial/ethnic vandalism.

“It’s just a continuous issue. I feel like it needs constant work,” he said. “There’s no one solution that’s going to fit everything. It’s something we’ve always struggled with.”

According to Nunnally-Rivera, “We just have to evolve … we need to change the environment.”

Nunnally-Rivera said he joined the SGA in this positon because of his passion for social issues and justice.

“I wanted to be in a position where I could have a positive effect and be able to come up with policies that help students of color and marginalized students on campus,” he explained.

Last week, the Daily Collegian published a story on the three swastikas found on campus and other instances of racial/ethnic vandalism in recent years, calling it a trend.

Nunnally-Rivera disagreed with that title: “I don’t think it’s a trend so much as it just shows the atmosphere of our campus that we are not as inclusive as we make ourselves out to be,” he said. “The idea that we’re considered a liberal college – I think that that throws people off, thinking that we don’t have issues that we need to work on ourselves.”

Leykia Brill, assistant provost for diversity at UMass, also questioned whether or not these acts constitute a trend. In an email to the Daily Collegian she wrote, “I don’t know if this sort of act is a growing trend, per se- I haven’t done the research to know how we compare to other schools. I can say that it happens on campuses all across the country, however. I can also say that these sorts of things have been happening for decades.”

Both Brill and Nunnally-Rivera said the administration is doing work to improve the climate on campus.

“We’re looking at ways the University will implement that plan, ways we can improve upon it, and also just the execution of that plan in general,” he said.

Nunnally-Rivera also wants to see the SGA step up its role in raising awareness and finding solutions to these issues. He pointed out that the organization was not as involved in the mobilization against racism that took place on campus after racial slurs were written on the door of then-SGA Diversity Secretary Josh Odam’s door.

“It’s in our by-laws, it should be in our values to create a community that’s inclusive, that calls out acts of hatred,” Nunnally-Rivera said.

“I feel that we should always be working to study these social issues, mitigating the effects of racial hatred and then when they do happen, we (should) have a swift and decisive response – no matter who is in power,” he added.

Nunnally-Rivera is reaching out to different groups on campus to discuss diversity, saying he wants to “get their take on what’s going on. And actually have people’s voices represented.”

“Oppression doesn’t really show itself how it (used to) anymore, not in the ways that people are familiar with,” he said. “So it’s up to people to educate themselves on actions that could be considered oppressive and calling them out when they see them.”