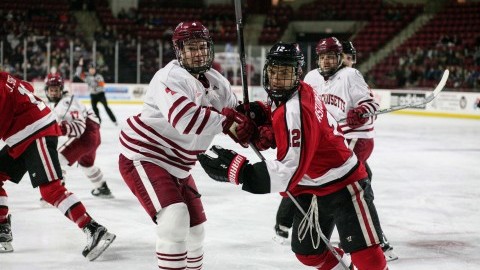 That’s how long it’s been since the Massachusetts hockey team recorded a win in conference play, with its latest defeat, a 5-0 loss to Northeastern, extending the Hockey East winless drought to 14 games.

After a scoreless first period in which the Huskies (11-13-5, 5-8-4 HEA) dominated possession but couldn’t find the back of the net, they erupted for three goals in the second period.

Minutemen (8-18-4, 2-13-4 HEA) coach John Micheletto was a man of few words in his opening statement after the game, summing up the 60 minutes he just watched in four words.

And he was right.

A 10-minute outburst in the middle frame led by senior captain Kevin Roy and junior Zach Aston-Reese was all Northeastern needed, as UMass (8-18-4, 2-13-4 HEA) was unable to find the back of the net for the fourth time this season.

Aston-Reese got the scoring going just 24 seconds into the second period, with Roy adding his first of the year five minutes, 16 seconds later. By the time Garret Cockerill added a third at the 9:09 mark, the game was virtually out of reach for the Minutemen.

Huskies coach Jim Madigan thought the team’s presence in front of UMass goaltender Nic Renyard was a main reason for the three-goal stretch.

“I thought we went to the net better and harder,” Madigan said. “The first goal was a result of that and Kevin’s goal was coming. We moved pucks and were attacking into the offensive zone.”

When asked what he felt made the difference in those decisive 10 minutes, Micheletto made it clear that the team’s unwillingness to play through the neutral zone and get into a rhythm caused struggles on both sides of the puck.

“It’s our valuing the puck and our decisions through the neutral zone,” he said. “You saw in the first period where most of their play was while in possession in the first ten minutes was all on the perimeter.”

He added: “They had very few grade-A opportunities, and then we wrestled in the second half of the first period momentum away, had the better of the chances. Despite knowing that they’re good in transition with their forwards, we didn’t want to make plays through the neutral to get us into the zone and get us to our game.”

On another night in which the Minutemen were held in check offensively, a theme that is becoming much too repetitive, Micheletto reiterated the puck management through the center part of the ice in the second period as a cause for their struggles.

“(We) didn’t give ourselves much of an opportunity to get to the offense at that point with what we were doing,” Micheletto said. “Wide-speed is to our advantage, every time we did it, it created offense or possession and then speed on the cycle. But then we wanted to flip pucks or go to our backhand or force things through a clogged middle when it’s readily apparent that that play is not there.”

UMass will not have time to dwell on its misfortunes as it is back in action Saturday night at Matthews Arena for the second of game of the home-and-home series against Northeastern.